On Wednesday April 22, 1,000 telecommunications employees who came to Tehran from rural areas of the country staged protests in front of the Ministry of Communications for the second day. 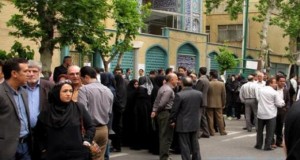 ILNA reports that despite a directive from the Ministry of Communications to implement new legislation, Iran’s Telecommunications Company has failed to do so.

The provisions of the passed legislation are meant to force the company to provide contracts for employees, contractors and agents in the rural areas and provide insurance until retirement.

Months after its enactment, the legislation reportedly has not been implemented.

More than 7,000 people work for the Telecommunications Company across the country and many of them do not have a regular contract.

The telecom workers have staged protests on several occasions in the past two years to demand greater job security.