More migrant boats in danger as Europe grapples with problem

As boats carrying asylum seekers continue to head for Europe despite repeated catastrophic accidents, the International Organization of Migration announced that its offices in Rome received calls on Monday April 20 about three more vessels carrying migrants in the Mediterranean that met with trouble and sought aid. 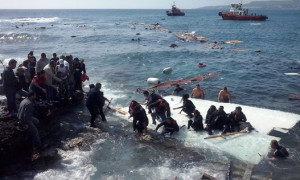 On Monday April 20, EU Council President Donald Tusk reacted to the string of disasters in the Mediterranean that have killed hundreds, saying: “This can not go on like this.” He warned, however, that there will be no quick solution.

EU heads will meet on Thursday April 23 for a special summit in Brussels to discuss a 10-point plan that may lead to increased distress assistance.

The plan has been delivered to the 28 members of the EU and will be put to debate on Thursday.
Federica Mogherini, the EU foreign policy chief, said the plan will help Europe deal with asylum seekers in a more organized manner.

Student activist gets furlough during last days of sentence