Saudi scud missiles reportedly hit the ammunition depot of a military base in Sanaa, causing a large explosion that killed at least seven civilians and injured dozens more. 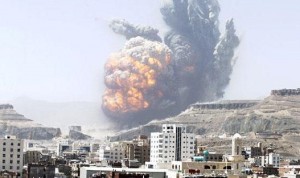 The Associated Press reports that the explosion occurred close to the Iranian embassy in the Yemeni capital but so far there are no reports of damage to the embassy building.

The explosion, which occurred on Monday April 20, destroyed several houses and shattered windows.

Saba, the Yemeni national broadcaster that’s now being run by Yemen’s Houthis, reports that more than 10 people were killed and hundreds were wounded.

Al Jazeera has also confirmed the explosion in Sanaa’s diplomatic area in the western part of the city.

This was reportedly the strongest air attack on the city since Saudi-led coalition began bombarding Yemen.

Reports from the capital indicate that thousands are fleeing the city, which was heavily shaken by today’s explosion and shrouded by a thick black cloud.

The UN has confirmed that there have been heavy civilian fatalities from the air strikes on Yemen, but Saudi Arabia insists that the attacks will continue until President Hadi, who has fled to Saudi Arabia, returns to power in Yemen.

Student activist gets furlough during last days of sentence