The Fars News Agency reports that 212 MPs have called for a fact sheet detailing the outcome of the nuclear talks in Lausanne earlier this month. 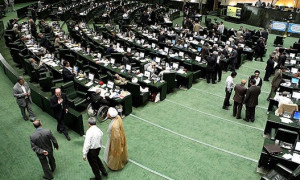 ISNA also reports that the MPs, according to the spokesman for the National Security and Foreign Policy Commission, have signed a petition to publicize the fact sheet as soon as possible.

IRNA reports that MP Karimi Qodousi, who argued with the foreign minister when Mr. Zarif was in Parliament explaining the results of the nuclear talks, initiated the petition.

While several MPs have called for immediate transparency, others such as Ardebil representative Kamaeldin PirMoazen have criticized the move, saying the nuclear negotiators should be given a chance to continue the talks with “strength, authority and perspicacity”.

Earlier, Ali Akbar Salehi, the head of Iran’s Atomic Energy Agency and also a member of the negotiating team, said the fact sheet is ready and will be released if the foreign minister deems it necessary.

There has been some disagreement as to the content of the consensus reached on April 2 in Lausanne, with the Iranian party saying sanctions will be removed at once when the agreement is executed and the U.S. parties saying the sanctions need to be removed more gradually.