Mine workers in Yazd sentenced after protests

Five workers at Chadormaloo Mine in Yazd Province have been sentenced to one year in jail and flogging for “disrupting order and public peace”. 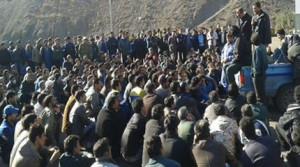 The head of the Chadormalu Workers Union, Bahram Hassaninejad, told ILNA that 25 workers were acquitted, adding that the one-year prison sentence was changed to a five-year suspended sentence and the flogging was changed to a fine of 300,000 toumans.

The report adds that the sentences were reduced in view of the workers’ ages and clean records.

Twnety eight workers were taken to court by management for their participation in earlier labour protests. The workers launched protests to demand better wages and benefits and intensified the protests when their representative, Bahram Hassaninejad, was terminated.

A group of 28 workers was summoned to court after management filed complaints against them.