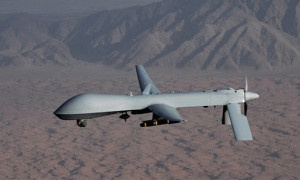 On Monday March 30, the United States insisted that its drone attacks in Tikrit are all targeting Islamic State of Iraq and Syria forces.

Meanwhile, the U.S. ambassador in Baghdad has said no attacks have been carried out near Tikrit University.

Two days ago, Sepah News reported that two of the IRGC’s advisers in Tikrit had been killed by coalition forces fighting against ISIS in Iraq.

The U.S. ambassador, without referring to Iran, has indicated that all coalition operations are being carried out by the request of and in coordination with the Iraqi government.

The operation to release Tikrit from ISIS forces was launched one month ago by Iraqi military forces, Shia militia forces, Kurdish Peshmergas and a number of armed Sunni tribes in the region with the support of IRGC forces. It was put on hold, reportedly to avoid civilian deaths and ISIS setting off mines in city streets.

The operation resumed last week with the accompaniment of the U.S. coalition airplanes.

The participation of U.S. planes in the operation was met with criticism in Iran, and reports indicate that Qassem Soleymani, the head of the IRGC Qods force, has now left the frontline in Tikrit.