Kian Tire workers protest privatization. They are demanding that the ownership of the factory to be returned to the public on 10 April in Tehran. 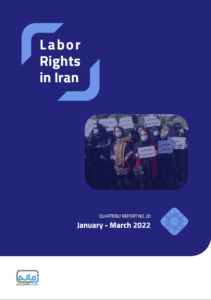 This period is marked by rising food prices, recession, and wage suppression which have led to widespread poverty and declining per capita consumption but also labor protests and strikes. The Supreme Labor Council (SLC) in Iran the month of March 2022, increased the minimum wage but still imposed wage repression on workers as the new rate still is not in line with the costs of living and was in the absence of actual workers’ representatives and independent trade unions. SLC determined that the daily minimum wage for temporary workers in the new Iranian year (March 21, 2022, to March 21, 2023) will be 139,325 tomans. (1 toman = 10 rials). This minimum wage is set at approximately 5 USD per day for 8 hours of work or approximately 62 cents per hour.

The wage committee of the SLC had set the subsistence basket or the daily living cost of an Iranian worker family of four at around 14 USD per day. As such the daily set minimum wage for this fiscal year in Iran is still much lower than the approved livelihood basket which makes the set amount of wage repression forces workers into further poverty.

In reality, many workers without a contract working or working with white contracts that are outside the scope of labor and social security laws will receive wages even lower than this set amount. This wage suppression is happening at the time that the Central Bank of Iran announced the rental rates increased by 48.4 percent in Tehran and 52.2 percent nationwide. Food prices have increased and some essential food items have increased by poultry by 33%, various red meat by 35%, and eggs by 20%.

The economic conditions coupled with demands of the workers for better work conditions have sparked protests and strikes among teachers, nurses, workers, and pensioners. Teachers held a nationwide strike for two days in the winter. According to the Coordinating Council of Teachers’ Unions, teachers in more than 100 cities refused to attend classes from 29-30 January and rallied in various towns in December and January. In February, teachers across Iran rallied in front of the Ministry of Education buildings. Many teachers were detained or summoned to security and judicial institutions.

Municipal workers across Iran continue in this period and also continued to suffer from wage arrears. In some cases, nonpayments of wages extend back more than one year. City officials attribute the situation to declining municipal revenues and the shortage of workforce contractors, which hold most municipal employees under their contracts. In this reporting period, municipal workers in at least 11 counties and cities have rallied to protest wage delays and harsh working conditions. As in previous months, Khuzestan province was the scene of the most dissatisfaction among municipal workers in particular in these cities: Kut Abdullah, Khorramshahr, Ahvaz, and Shush. In Lorestan province, Khorramabad municipal workers protested the fact that they did not receive wages for at least six months.

As in previous seasons, oil and gas contract (temporary) workers protested wage arrears, layoffs, temporary contracts, non-implementation of job ranking schemes, and inadequate wages. At least 60 rallies and sit-ins took place in production, mining, oil, and gas units between December 2021 and February 2022. One of the most critical protests was the return of the workers of Iran National Steel Industrial Group (Ahvaz Steel) to the streets. Workers of Tabriz Tractor Manufacturing, Khuzestan Mian-Ab Sugar Company, and Pars Haft-Teppeh Paper Company staged the highest number of protests in production units. Some of the workers’ protests in this period include protests and strikes of Abadan Petrochemical, Kian Petrochemical, Khuzestan Pipe Manufacturing, Kian Tire, Tabriz Tractor Manufacturing, and Saipa Industrial Molds.

The anger is not happening among workers who have permanent or temporary contracts. Informal workers and the unemployed who are involved in temporary work such as working as vendors are also a force that the state is treating as a security threat.  This winter, municipalities continued the practice of “organizing” vendors, which in reality is meant to create more restrictions on them. Similar policies are being implemented in Tabriz, Amol, Boroujerd, Mahshar, Gorgan, Qazvin, and several other cities. Protests are also happening among information workers. On January 25, 2022, temporary construction workers rallied in front of parliament to protest the lack of insurance and demand the approval of Article 5 of the Construction Workers’ Insurance Act.

Like other reporting periods, retirees from  January to March 2022 rallied or staged protests at least 25 times in different cities. Social Security retirees and the Steel Workers’ Support Fund had the highest frequency of retirement protests. The number one demand of retirees this winter is a request to match pensions in proportion to current wages.

In an anti-labor policy targeting female retirees, the government did not pay retired women their spouses and child support bonuses at the end of the year. The Iranian Labor News Agency wrote that the government directive on New Year bonuses in 2021 is the reason for the 650,000 toman gap between female and male workers’ New Year bonuses. By passing anti-women laws and directives under the pretext of protecting the family, President Ibrahim Raisi’s cabinet intends to remove more women from the labor market and channel them to domestic labor, which is outside the scope of labor law.

More wage repression and contract repression also target those women who are working in care labor. In early 2022, Iran went through its sixth wave of the COVID-19 pandemic. The government did not meet its promises to improve nurses’ livelihoods, including the implementation of the Nursing Services Tariff Law and the conversion of employment contracts for nurses experiencing discrimination and exploitation due to various informal agreements. In January 2022, the Planning and Budget Organization (PBO) officially announced that it would not be able to hire new nurses due to a lack of funding. This announcement meant that hundreds of nurses who were employed on 89-day temporary contracts to surge to meet the demand of previous coronavirus outbreaks were on the verge of being fired. In Iran, 80% of nurses are women and they are forced to work longer hours in more difficult conditions due to a shortage of nurses, yet earn lower wages.

The situation for Afghan immigrant workers in Iran grows increasingly difficult. The process of identifying, detaining, and deporting illegal immigrants has intensified, according to a report by the newspaper Ettelaat on February 2, 2022. Many immigrants do not spend the night in their dormitories due to fear of arrest and deportation. On February 9, Afghan government officials in Nimroz province, a refugee and migrant worker crossing point for Iran, announced that Iranian security forces had killed 100 refugees and injured 640 in six months.

Unemployment, deferment or non-payment of wages and benefits, freedom of association and assembly continues to be the main issues workers and independent unions face in Iran. Zamaneh Media monitors these topics daily, and this report provides an overview of the most critical Iranian labor rights issues over the past three months. The information in this report does not address all labor-related events and topics. In addition to the quarterly reports, Zamaneh Media also publishes special reports on specific labor topics as well as an annual report. For all previously published reports, please visit Zamaneh’s labor page: