One year after the onset of the new coronavirus pandemic, a new wave of the disease begun in Iran in Feb 2021, hitting Iran’s economy hard; an economy that has been already stagnant due to US economic sanctions and structural corruption.

Women in the workforce were hit particularly hard. More than one million women were expelled from the labor market. The population of economically active women – women who have jobs or are looking for jobs – has shrunk by about 1.4 million. The number of unemployed women increased by 777,000. These numbers only cover formal employees who are subject to labor and social security laws. The continuing economic downturn has resulted in layoffs for many workers in “informal” occupations as well.

The Statistical Center of Iran, however, claimed in its quarterly reports that the unemployment rate has dropped to 9.8% – a number that has been achieved by not counting those who have lost jobs and who no longer seek jobs and are therefore counted as economically inactive.

Another group that has suffered as a result of the fourth wave of covid-19 in Iran are teachers and in particular, the “service purchase” teachers who are hired by third-party private companies with hourly wages. Man of them have lost hours and the payments of those hours they have worked have delayed by up to one year. Over the past three months, “service purchase” teachers rallied at least 19 times in various cities to demand a more secure contract.

Nurses in Iran have become a vulnerable group not just because they are frontline workers but also because those nurses working in private hospitals are still paid low wages, are not receiving enough covid-19 related bonuses, payments are delayed and they are being forced to work long hours.

With every labor-related protest, there is also suppression. In the reporting period, employers, along with security and judicial institutions, have cracked down on workers, labor advocates, teachers, and retirees in a variety of ways.

Download the Jan-March report to learn more about the situation of workers and labor issues, in this period: 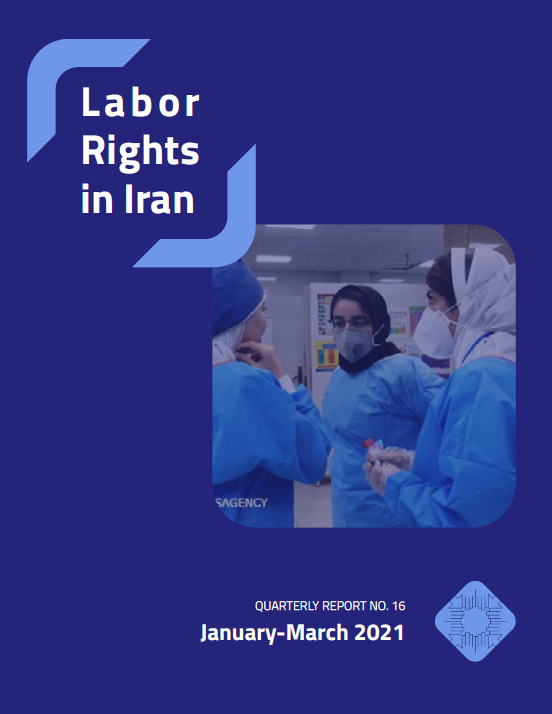