What Did the Founder of Wikipedia Write in a Direct Message?

*This is the second part of the article Curious Case of  Persian Wikipedia.

In recent weeks, a lively debate started in the Iranian diaspora about the accuracy of Wikipedia articles and whether the Iranian state was using measures to impose censorship on its content through the volunteer writers. The conversation began in Social Media after a report on Open Democracy by Sina Zekavat raised an important question: Is the Islamic Republic of Iran outsourcing its censorship, and does it use the Persian Wikipedia as a tool? 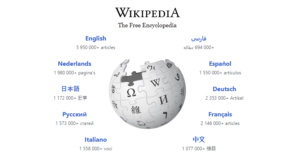 Many users on social media started questioning the independence of Persian Wikipedia. Sina Zekavat’s investigative report went viral on social media after a Farsi translation of it was published in Radio Zamaneh on 19 September 2019. In the last four weeks, hundreds of comments were exchanged on the subject and the Iranian community online has shown particular sensitivity about the accuracy of the content and the nonalignment of an encyclopedia that aims to be independent. Activists, journalists, ordinary users, and even Jimmy Wales, the founder of Wikipedia, took part in these conversations.

However, the primary concern is still open to debate: How much can Persian speaking users trust Persian content on Wikipedia?

The conversation continues in Persian social media. Twitter is a platform that was predominantly used for most of the debate on the subject.

One of the first reactions came from Mohsen Salek. He introduces himself as the Persian Wikipedia Manager. Salek lives in Iran, in the city of Zanjan. He writes on Twitter, “Wikipedia is a vast community of users. It is not as if one group or a few people can control it.”

He also mentions Sina Zekavat’s article and dismisses the idea that collaboration has been happening behind the scenes with state actors for censorship of content. He writes: “A reporter by the name of Sina Zakwat recently published an article on a foreign website about Wikipedia that today the Persian translation of it was published in Radio Zamaneh. To summarize, that article combines some truth with some false statements to reach a particular conclusion, which is utterly inaccurate.”

Salek’s tweets were not the end of the discussion but only the beginning. Another controversy was about a meeting that took place between Iranian officials and Persian Wikipedia on 11 September 2018.

The official narrative was that “A professional meeting on the application of Wikipedia tactics in communications” was held in Tehran. In this event, a few editors of Persian Wikipedia and one official from Iran’s Ministry of Culture and Islamic Guidance were present.

Sina Zekavat’s article suggests that this meeting was an organizational link between Persian Wikipedia and the Iranian state.

Hamid Ziaei Parvar, at that time, was the official who attended the event. He was the head of Iran’s Bureau of Media Studies and Planning, a sub institution of Iran’s Ministry of Culture and Islamic Guidance. In his tweeter page, Ziaei Parvar only introduces himself as a communication expert born in Sabzevar. However, some journalists have argued that the center that Ziaei Parvar was working for, was a sort of a state-run Soft-War center.

Since early 2005, the Iranian state has been using the term Soft-War in state rhetoric, repeatedly. The Iranian Supreme Leader, Ayatollah Ali Khamenei, since the early 90’s has warned against what he calls as a cultural war of the West against Iran. The term soft-war rooted in the idea of the soft power of the West, has become a collective of policies, methods, and strategies that the Islamic Republic of Iran employes to fight liberal ways of life and Western influence. Fighting with the soft power of the West by waging a Soft-War has been a mandate of Iranian Basij since 2005. A good share of this Soft-War is happening in Iranian Social Media online.

Omid Shams, who is a journalist and researcher based in the UK, first wrote in his twitter about the presence of Hamid Ziaei Parvar at the meeting of state officials with Persian Wikipedia editors. Shams introduced a think tank in Tehran that is called Abrar Moaser Tehran International Studies and Research Institute. According to Shams, this institute has been working on national and international security.

Shams argues that Soft-War has become a pretext for the suppression of hundreds of journalists, activists, and ordinary citizens online.

In another Tweet, Shams claims that Ziaei Parvar is downplaying his role in the project of Soft-War.

Hamid Ziaei Parvar in several tweets responds to allegations that he is a “Soft-War” theorist. He links to his website that includes most of his publications and asks everyone to read his work.  While he has produced a substantial amount of content on the subject of waging a “Soft-War” and he is a specialist on the issue, Ziaei Parvar says that critics have not read his particular readings and theories. He says that his theories have been attacked both by hardliners and by reformists within the state and that if he was a state-affiliated Soft-War theorist; he would at least be holding a government post or a higher education tenureship at a university. He further adds that he has never met with any Wikipedia Persian editor aside from the one meeting that has become public.

Zamaneh tried to contact Hamid Ziaei Parvar to ask him about allegations of his collaborations with the Ministry of Culture and Islamic Guidance and his connections with Persian Wikipedia. He declined the request for an interview and said he has nothing more to say than he has already written on his Twitter account.

Arash Sarkohi, a translator and researcher based in Germany, was another person who was concerned about the meeting of Persian Wikipedia editors with officials of the Ministry of Culture and Islamic Guidance. In a tweet, he asked Mohsen Salek, the volunteer manager of Persian Wikipedia, why they attended a meeting with officials from a ministry that specializes in media war and censorship. Sarkohi described attending this meeting as a questionable act.

The exchange of comments was not limited to Persian speakers online. Jimmy Wales, the founder of Wikipedia, was following the conversations in social media. In a tweet to the writer of the Open Democracy article, he wrote:

“I am not ignoring you. I’m seeking further information before making any sort of comment. This is too important for me to speak before I have full knowledge! (I’m not Trump on twitter – I try not to spout off without understanding!)”

I am not ignoring you. I'm seeking further information before making any sort of comment. This is too important for me to speak before I have full knowledge!

(I'm not Trump on twitter – I try not to spout off without understanding!)

It was a response to a tweet from Zekavat, saying that Jimmy Wales has been ignoring his evidenced questions about the cooperation between Persian Wikipedia managers and Iranian state officials.

We do not know what was said in that private message, but the questions remain: What can Wikipedia do to prevent the organized effort from state censorship machines and the potential for manipulation by any government, groups, and players to ensure the utopian cyber world of Wikipedia is an achievable dream?