Zamaneh Opinion Panelists: Support for the Letters of Dissidents inside Iran Asking the Supreme Leader to Step Down

The majority of Zamaneh audience who took part in the latest opinion panel say that they support the recent statement of activists inside Iran demanding the supreme leader to resign along with other sets of demands. More than half of those who have taken part in the survey presented in Zamaneh Media’s Opinion Panel live inside Iran. However, the panelists choose different means to reach the demands that had been asserted in the letter of Iranian activists. 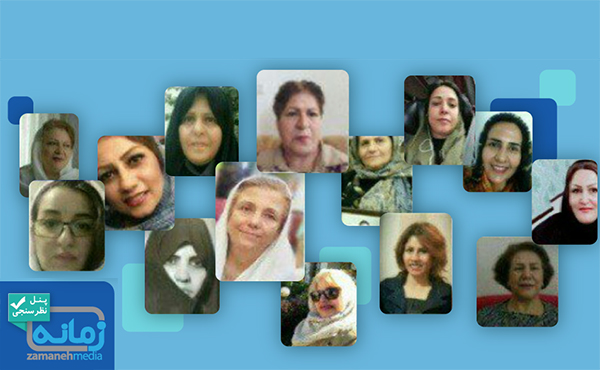 As for the demand for the resignation of the Iranian Supreme Leader, Ali Khamenei, panelists believe that “it is time” for fundamental changes in Iranian constitution and Supreme Leader should step down. Almost half of the panelist believe in regime change in Iran as the best solution for Iran and less than half want a transformation that is rooted in civil and social movements.

In recent months, a group of social and political activists and Iranian dissidents have released three letters demanding the resignation of the Supreme Leader in Iran and asking him to make political transition possible. The letters are signed by dissidents who are asking for a democratic state and demand a transition away from an Islamic theocracy. Most of the individuals who have signed these letters have been arrested so far.

The signatories are a group of civil, political and union activists and they all live inside of Iran.The first letter was addressed to the “fellow citizens in Iran,” and the signatories called upon fellow Iranian citizens to step up and demand fundamental change in the Iranian constitution and to nullify the political seat of the Supreme Leader.

Zamaneh Media recently launched an opinion panel asking those who took part a series of questions about different issues related to these demands of dissidents from inside Iran.

Zamaneh Media’s Opinion Panel is a platform in which users can join to provide a series of demographic data about themselves and have the option of returning to the panel to take part in specific surveys.

In the fourth survey presented on Zamaneh Media’s Opinion Panel, we asked the panelists about their views on the recent letters of activists inside Iran.

The survey was conducted in the first week of September 2019, almost three months after the first letter was published and at a time when most of the signatories have been arrested by security forces in Iran. The Islamic Republic of Iran is experiencing pressures from multiple fronts. Iranian people are in distress and concerned with the level of government mismanagement and economic corruption. The state’s suppression of citizens’ rights and dissidents is alarming and the lack of freedom of speech is felt by everyone and especially by journalists, media professionals, and social media users.

The economy is at an all-time low due to the reinstatement of sanctions after the U.S. withdrew from the Joint Comprehensive Plan of Action (JCPOA). The value of Iran’s currency has dropped to record lows and its annual inflation rate has quadrupled. Over recent months, international tensions have added to the anxiety of Iranian people and made many anxious about the possibility of war and military conflict between Iran and the U.S.

During the first week of September 2019, between 1 and 4 September, 305 Zamaneh Panelists participated in our fourth online survey. About 61% of the panelists live inside Iran. The key findings were:

Supporting the Letters and the Demands of Signatories

On 12 June, fourteen civil rights and political activists in Iran called for the Iranian Supreme Leader, Ayatollah Seyyed Ali Khamenei to step down. In an open letter, they also demand fundamental changes in the Iranian Constitution.

According to Article 1 of the Iranian constitution that defines the form of government in Iran. Iran is the Islamic Republic. Referencing this article, their statement said:

A few days after the first open letter, the same group published another statement. In the second statement, they called for a movement of non-violence and a peaceful transition in the Iranian political system. They also demanded a free election. On August 5, a third letter was released referring to a similar demand of the fourteen political and social activists, but this time the signatories were women’s rights activists. Fourteen women’s rights activists who all live inside Iran in a new letter protested the “gender apartheid” dominating the country.

“Four decades of Guardianship of the Islamist jurist (velāyat-e faqīh) has eliminated the rights of half of the country’s population,” they said in their statement. In this letter, they also asserted to continue the quest for their demands by civil and non-violent ways.

We also asked our panelists if they are supporting the 14 female activists’ letters and their demands.

The result was similar, about 87% of users who participated in this opinion poll said they support women’s demands, less than 7% opposed and almost 6% said they are neutral in this matter.

The Time to Act is Now

The first letter of the fourteen activists started with this sentence: “The time has come for the people, thinkers, and caring individuals to lead a national movement by setting aside conciliatory tendencies that have facilitated the destruction of our culture, civilization and national wealth and with all honesty step into the ring and demand fundamental changes to the Constitution and the resignation of the Leader who is unjustly extending his authority on a daily basis.”

We asked our panelist if they feel the same way, and if “the time to act is now?” Almost 76% of the panelists agreed with that statement  while about 13% disagreed with that.

The Disappointment towards Governmental Reforms, Distrust towards Oppositions’ Abilities

Finally, we asked our panelists that in their opinion how can a major change in Iran be possible?

While they did not believe in governmental reform, they said they don’t trust the power of opposition groups. Around half of them believe the regime change is the answer while more than a third of our panelists believe a change could be possible through the formation of civil movements, about 5% percent believe that reforms from inside the regime are key, roughly 1% think opposition groups can be a source of change and almost 5 % rely on help from foreign countries. the rest of the panelists believe the solution could be a combination of the aforementioned factors. 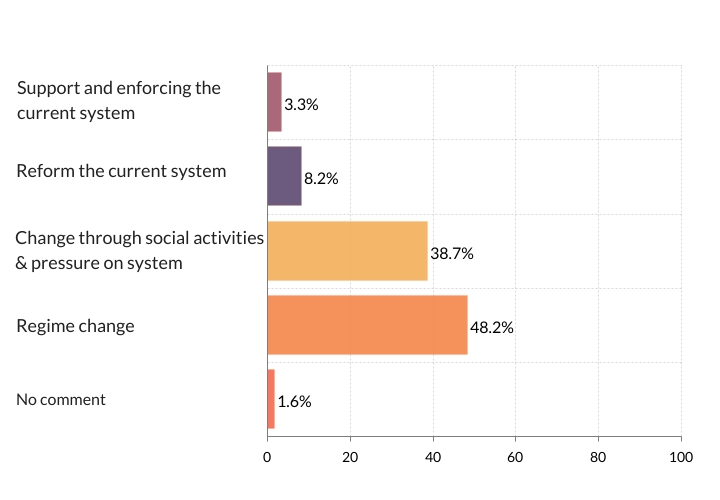 In conclusion, almost 90% of panelists want fundamental changes in Iran but their understandings of the major forces for reaching this goal is very diverse and different.