Shahla Jahanbin and Shahla Enterasri, two Iranian civil rights activists who have signed a letter that asks the Islamic Republic’s Supreme Leader to resign his post, were arrested on 21 and 22 August respectively. 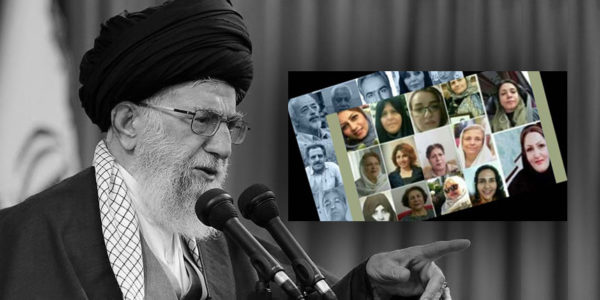 On 5 August fourteen women in Iran, including Shahla Jahanbin, released a letter in which they called upon the Islamic Republic of Iran’s Supreme Leader, Ayatollah Ali Khamenei to step down and in order to make the political transition possible.

The letter that these women have signed is one of three open letters with similar demands. In recent months a group of social and political activists have released three letters demanding the resignation of the Supreme Leader in Iran and asking him to make political transition possible. The letters are signed by dissidents who are asking for a democratic state and a has away from an Islamic theocracy. Overall, thirteen of the individuals who have signed these letters have been arrested so far.

A few weeks before the letter of fourteen female activists, on 12 June, fourteen civil rights and political activists in Iran called for the Iranian Supreme Leader, Ayatollah Khamenei to step down. In a statement addressed to the “fellow citizens in Iran,” the signatories called Iranians to step up and demanded fundamental changes in the Iranian constitution and Khamenei’s resignation.

The signatories were a group of civil, political and union activists and they all live inside of Iran.

“The horrendous history of the past 40 years shows that not only there is no will for leaders to be accountable to the Iranian people but also the ruling system insists on its way and the autocracy,” The activists said in their statement.

According to Article 1 of the Iranian constitution that defines the form of government in Iran. Iran is the Islamic Republic. Referencing this article the statement said:

“This situation contradicts the first article of the Iranian Constitution. There is no “Republic” in the Islamic Republic – there is no freedom.”

A week after the first open letter, the same group published another statement. In the second statement, they called for non-violence and through a transition in the Iranian political system demanding a free election.

“We are hoping for a democratic and secular government” They demand in their second statement. The activists also asserted that there is no way left for reform and for the reconstruction of the current political system.

A few weeks after, a third letter was released by fourteen women activists on 5 August.
Referring to a similar demand of the fourteen political and social activists, the women’s rights activists in a new letter protested the “gender apartheid” dominating the country.

“Four decades of Guardianship of the Islamist jurist (velāyat-e faqīh) has eliminated the rights of half of the country’s population,” the women’s rights activists said in their statement.

In this letter, they also asserted to continue the quest for their demands by civil and non-violence ways.

Giti Pourfazel, an attorney, who is one of the signatories told Zamaneh that the main reason for the issuing this statement is rising public attention to women’s problems.

“It seems that women are not the citizens of this society,” Giti Pourfazel said.

The signatories have called on the Iranians to join them and saying, “No to the Islamic Republic.”

All these women live inside Iran and releasing this statement has been described as a brave and Nobel act by the observers.

Iran Detains another Dual-National British Citizen: this Time a Researcher Working on Minorities