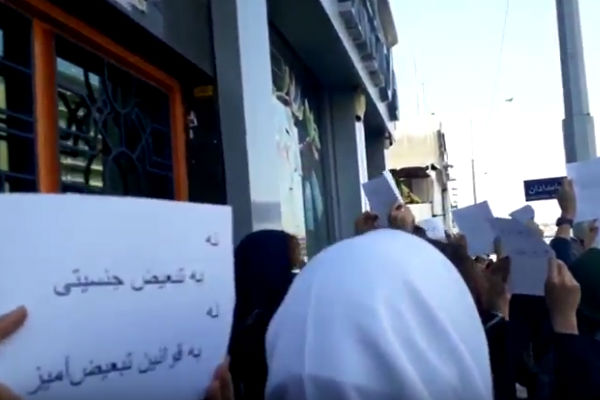 The families of those arrested staged another protested in front Vozara detention center in Tehran and stayed there all night. There are some reports that the men who were arrested have been transported to Evin prison.

The March 8th protesters were reportedly carrying signs such as “No to Gender Discrimination”, “Equal pay for Women” and “Freedom, Equality and Gender Justice”.

Since January 2018 a movement to oppose compulsory hijab in Iran has gained momentum. In this movement, women come to streets without wearing the veil and wave their veils in their hands like a flag. Some have also started browsing the streets of cities and public venues without wearing the veil. This movement has been violently suppressed with some women now charged and sentenced to two years in prison.

Meanwhile, the reformist within the governmental bodies have tried to celebrate International Women’s day as much as the acceptable state ideology allows.

Tehran City Councillor Shahrbanu Amani speaking on International Women’s day at the Second Congress of Successful Iranian Women said Iran has regressed in terms of laws concerning women and stressed that the country cannot be a viable economic competitor in the international scene as long as it ignores the potentialities of women.

“We trusted the system but the result of that trust was remaining tied to the house. But they must understand that women and most specifically educated women are half of the country’s human capital and they are being wasted.” Amani said.

The employment rate among women is a measly 11 to 13 percent. 78 percent of women reportedly do not engage in any economic activity in Iran. This means that a significant portion of the country’s population does not contribute to the gross national product. Meanwhile, 70 percent of educated women are unemployed. Women’s economic participation in Iranian society has been identified as one of the lowest rates among both Islamic and non-Islamic countries. Of the 27 million Iranian women of working age, only 3 million are engaged in employment.

Amani spoke of the prevalence of discriminatory laws against women hoping that the review of laws such as women’s obligation to acquire their spouse’s permission to leave the country or obtain a passport and women’s right to child custody would yield positive results for the empowerment of women.

She spoke out against child marriages reporting the presence of 15 thousand widows in the country under the age of fifteen. A recent report from the Managing Director of the Association for the Protection of the Rights of the Child indicated that marriage of children accounts for 24 percent of marriages across the country. Iranian laws allow the marriage of women at age 13 and men at 15 with discretionary rights given to the court to rule against it if it sees fit. Efforts of Iranian women parliamentarians for the past year to increase the marriage age has not been successful. They are pushing for marriage age of 15 for women and 18 for men. Before the 1979 Revolution in Iran men and women could not get married under the ages of 20 and 18 respectively. After the Revolution, the marriage age for women became nine and men were allowed to marry at the age of fifteen.

The grassroots movements of Iranian women objecting discriminatory laws was not represented in government organized events of International Women’s Day. Those who represented the grassroots were the one who had gathered in front of the Ministry of Labour. Close to 80 participants were immediately arrested at the site of the protest. Some of the detainees were identified as Banafsheh Jamali, Zohreh Asadpour, Mehrdad Fallahi, Parastoo Alhayari, Azadeh Behkish, Azar Gilani, Peyman Chehrazi, Ali Salem, Bahar Aslani, Soodabeh Rakhsh, Aina Ghotbi Yaghoobi, Moloud Hajizadeh and Safra Karimodin.

300 Iranian Dervishes Remain under Arrest after Clashes with Security Forces