Islamic Republic of Iran (IRI) judiciary states that the environmentalist professor who died under suspicious circumstances in prison was member of an espionage network. Meanwhile, his son speaks out about the atrocities that the country’s security agents have committed against his family members and his late father and says his father’s death has escalated tensions within factions of the IRI. 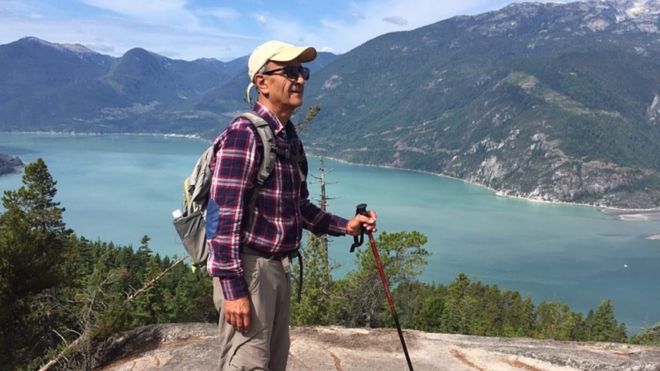 The Iranian-Canadian Kavous Seyyed Emami, 63 was a professor of sociology of religion and an environmentalist. He was arrested by the intelligence faction of the Islamic Revolutionary Guard Corps (IRGC) on 24 Jan 2018. No charges were brought against Seyed Emami until his death in a prison cell – a death that was announced on Feb 9th and that the Iranian human rights community is calling suspicious. The Iranian judiciary is calling the cause of death suicide.

Dr. Emami’s son now says that IRGC security forces have threatened his family both when his father was in custody and after his death. The judiciary and IRGC agents have also denied the family the right to an independent autopsy and have conducted their own autopsy not allowing family lawyers to be present.

On Feb 14, Ramin Seyed Emami, the son of late Dr. S. Emami wrote on his blog that security forces in Iran have put his family under pressure and have banned them from disclosing information to media.

Ramin writes that “threats of harming his dad” forced the family to keep silent during the time Seyed Emami was in custody.

On Feb 9th the 27th District Court in Tehran summoned Maryam Mombeini, Seyyed Emami’s wife where Security officials affiliated with the IRGC interrogated her for three hours, threatened her and coerced her to sign a paper saying that she will not speak to the media about her husband’s death.

The closed-circuit footage from Seyyed Emami’s last hours in a prison cell was presented to Ramin and his account is similar to some members of the IRI parliament who have also seen this footage. Seyyed Emami’s son confirms that the video shows a man in distress but does not show the actual happening of a suicide. Ramin writes:  “I won’t speak of the pain of seeing this video, but I will say that nothing in it is conclusive. The actual death is not recorded. All I could see is that my dad is nervous and restless. He is not himself. He paces the cell to and fro. I can say the man in the video (my dad) who goes into a different room, which we were told was the “bathroom,” by himself, is not in a sound psychological condition. Seven hours later a body is carried out of that room.”

One day Ramin Seyed Emami disclosed that security agents have been harassing and pressuring his family “20:30” a television program affiliated with the intelligence factions of IRI aired what they called a “documentary” in which the brother of the late Seyyed Emami seemed to be a forced to give a confession attesting that he has seen the video from the cell and that the cause of death is suicide.

The program goes on to claim that Seyyed Emami and other environmentalists who are still in custody were part of CIA, Mossad espionage network collecting information on Iran’s ballistic missile programme. No evidence is presented for this claim but the state TV claims that cameras that the group had set up to watch for wildlife were used for monitoring missiles.

Dr. Seyed Emami was the director of Parsian NGO and along with his arrested colleagues was working in the habitat of the endangered Asian cheetah. The cameras were set up to monitor t habitat.

Tehran prosecutor Abbas Jafari Dolatabadi has also accused Dr. Emami and the other arrested environmentalists of espionage charges saying that the conservationist work they did was a as a cover to collect “classified information.”

This is an accusation that the Iranian environmentalist community finds to be absurd. More than a dozen activists, journalists and environmentalist have expressed their concerns and objected these charges including the former head of the Department of Environment, Masoumeh Ebtekar who said she is “worried” about the arrests of environmentalists in Iran.

Ebtekar who is currently heading the Department of Women and Family Affairs and is the first female member in the cabinet of Iranian President Hassan Rouhani, seems to be a target in the case brought against the environmentalists in Iran. The Persian speaking social media have been filled with users affiliated with the state who are reiterating the narrative of linking Seyyed Emami to foreign spy agencies but they have also posted many photos of him with Ebtekar implicating Ebtekar in the case.

A tweet showing Entekar and Seyed Emami together in a frame implicating the cabinet member with the late professor:

The suspicious death of Dr. Emami and the arrests of environmentalists has increased the already existing tension within factions in the Islamic Republic namely between the government of Hassan Rouhani and the hardliner sector of IRGC that heads the security agency of this armed organization.

Ramin Seyed Emmmi has written about this tension among various state factions in his Instagram account: “those who have caused this tragedy are apparently under pressure from other factions within the state and have to answer. As such in order to justify this they are spreading accusations against my father.”

Human rights groups like Center for Human Rights in Iran (CHRI), Amnesty International and Human Rights Watch have all condemned Iran Judiciary and IRGC intelligence and are demanding an independent  investigation into the suspicious death of Seyed Emami and the arrest of the environmentalists in Iran.

Seyed Emami is the third case of suspicious death announced as suicide by the Iranian prison authorities since mass protests started in the streets of Iran in Dec 2017 and Jan 2018.  Seyyed Emami is also the second Iranian-Canadian who dies a suspicious death in Iranian prisons. In 2003 of 54-year-old Zahra Kazemi was killed in prison. She was arrested while taking photos of the notorious Evin prison.

Canada is under pressure to lead an investigation and demand for an independent autopsy. Iran and Canada have no diplomatic relations and Seyyed Emami has already been buried and exhumation of body will likely not happen even if the Canadians request it.

In the meanwhile Hassan Rouhani has appointed a committee to investigate what his office calls “regrettable incidents” in Iranian prisons.