Plasco Building Disaster in Tehran Persists for Victims one Year on

It has been one year since the disastrous Plasco Building fire in Tehran and authorities continue to pass on the burden of responsibility to others while the victims of the disaster, namely the workers, firefighters and store owners have received none of the assistance promised by the government. 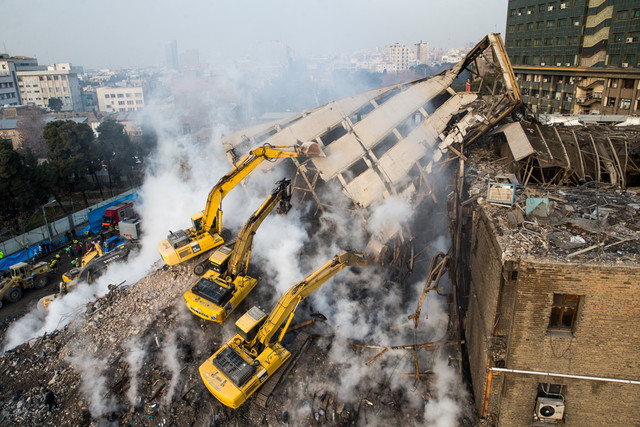 On January 20, 2017 the Plasco building caught fire and collapsed after burning for four hours. The event claimed the life of 22 people and injured 235. The investigation identified “short circuiting and gas condensation from a heating propane tank” as the cause.

Shahrvand daily quoted Tehran Chamber of Commerce saying that the destruction of the large clothing wholesalers due to the collapse of the Plasco Building left close to 50 thousand people jobless but only 524 of them have managed to collect unemployment insurance.

Following the Plasco disaster, the government promised that workers and craftsmen who suffered any damage in the fire and collapse will receive financial assistance but the head of Tehran’s Clothes Makers Union told reporters that only one individual has received the said assistance. Promise of assistance loans and exemption of loan repayment for these victims has also been buried under red tape.

The firefighters who lost their lives during the rescue operations have not been given the title of martyr which is the prerequisite for the families to receive any compensation. The Martyr Foundation’s legal deputy in parliament has told ILNA that to be recognized as a martyr an individual must have “lost his life for advancement and preservation of the achievements of the Islamic Revolution and Republic or the sovereignty and territorial integrity of the country.” They have concluded that victims of high-risk government jobs such as firefighters are not therefore martyrs.

A member of Firefighters Union has told ILNA that all the promises made to firefighters following the Plasco disaster, including the promise of early retirement, have been abandoned to oblivion.

The Plasco Building was owned by the Mostazafan Foundation of Islamic Revolution, a charitable foundation that provides aid to the needy in the form of low-interest loans. The Foundation has been widely criticized after the disaster, because inspectors from the ministry of labour and health had already filed several warnings regarding the site safety and fire regulations with Tehran City Council. Head of the Foundation has stated however that the City Council had never sent them any warnings.

Last Friday on the eve of the disaster the Foundation issued a statement that the management of the building had been passed on to the Construction Council over ten years ago. It also states that the Foundation has now signed an agreement with Tehran City Council and the judiciary to build a thirteen storey building called Plasco Building 2. Tehran mayor has confirmed the news saying the construction will start in February 2018.

Tehran City Council has been criticized for shortage of adequate firefighting equipment. Meanwhile the rescue operation carried out by the Firefighting Organization has also received a poor report card. The current head of the organization revealed that the fire caught their department by surprise but that they have now used the lessons from the disaster to improve their skills and are in the process of international liaisons to raise their standards.

Labour law experts tell ILNA that shutting down of unsafe workshops remains unforeseeable and the City Council has merely settled for the installment of fire extinguishing systems in hazardous buildings. Meanwhile Tehran mayor says unsafe buildings such as the Aluminium Tower continue to receive warnings from the City but have so far chosen to disregard these warnings. The Mayor adds that it is up to the owners to take heed of the warnings as they have passed on the burden of responsibility to them.

The Active Manifestations of a Passive Revolution