The Islamic Council of the Workers of Tehran’s largest cemetery, Beheshte Zahra announced that it has filed a complaint against a recent court sentencing. The sentence involves a woman who was convicted of having illicit relations with a man. She was reportedly sentenced to 74 lashes and two years forced labour at in a mortuary. 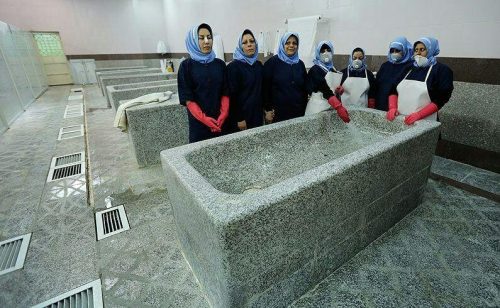 Embalmers at Beheshte Zahra mortuaries, which include college educate women, have responded to news of the sentence saying their job is providing an essential service and should not be used as a form of “retribution for infidelity”.

Iranian media reported in May that a court has sentenced a married woman accused of having an extra marital affair to 74 lashes and two years labour embalming cadavers. Mina, a 35 year old married woman, was found guilty of illicit relations will be serving as an embalmer for the next two years in Beheshte Zahra mortuary.

The Labour association of Beheshte Zahra workers has contacted ILNA to publicize its complaint against the court’s ruling. According to ILNA the embalmers state: “We feel demeaned. Our job is a noble job in the service of the public. We endure eight hours of hard and demanding work as well as a myriad of problems and stresses. However, such treatment by the judiciary is intolerable.”

Among the women embalmers of Beheshte Zahra there are a number of highly educated women who have chosen the profession in the absence of jobs in the professions they were academically trained for. A law graduate who is currently working as a embalmer has told Etemad daily: “There are many candidates who apply to become embalmers here. There are very strict criteria however. Applicant need to be bot physically and psychologically strong. They are also expected to have a good grasp of legal and religious regulations related to their job.”

In Beheshte Zahra mortuary five women embalmers prepare 70 cadavers for burial on a daily basis. Many embalmers suffer from back, leg and joint injuries after years of working at this profession since the physical demands of the work are highly strenuous on the body.

Extra marital affairs can carry capital punishment according to Islamic Republic Sharia laws. Stoning and flogging are possible sentences handed to those convicted of betraying their marriage vows. This is a first time that working at a mortuary has been regarded as appropriate punishment in this regard by the judiciary.