An official with Mashhad Judiciary in Iran says that the recent arrests of 27 individual in Iran are linked to “ISIS terrorists”. 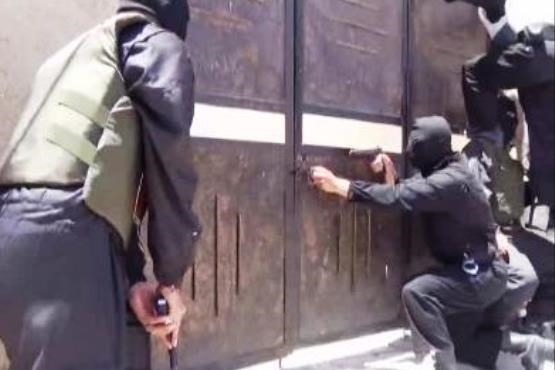 Hussein Heidari, the deputy prosecutor of city of Mashhad has told local media on 9 July, that initially 21 individuals were arrested but the number of arrests is now 27 mostly Afghan nationals.

Heidari characterized the arrests as “massive clampdown” on terror cells in the province of Khorasan-e Razavi by the intelligence forces. There are also Iranian citizens among those arrested.

Heidari linked the arrests to the June 7th twin terrorist attack on Iran’s parliament and the mausoleum of Ayatollah Khomeini, the founder of the Islamic Republic. Rights groups working on Iran are concerned that arrests post June 7th are backlashes against Iranian Sunnis and now Afghan refugees.

Human Rights activists are concerned that the recent attacks claimed by ISIS is rippling into intensified crackdown on members of Iran’s minority Sunnis. Especially during the whole of month of Ramadan, Iran security forces raided four Sunni mosques in cities of Bukan and Mahabad in the Kurdish regions arresting at least 25 individuals.

After the June 7th attacks Iran Human Rights Organization issued a statement condemning the attacks in the Iranian capital yet warning against “illegal actions such as torture, coerced confessions and executions” triggered by them. This human rights group says have received news of “systematic and arbitrary abuse directed toward the various Sunni groups in the country”.

For the 27 individuals arrested in Mashhad, the prosecutor’s office was quick to link them to ISIS. Heidari told local media: “we traced the suspects and found out that some of them arrived in Iran illegally after undergoing training courses on terrorist attacks.”

Most Afghan refugees who arrive in the northeastern province of Khorasan, do so illegally and they do not have proper legal representation when arrested.

Scores of people have been reportedly arrested in the past weeks in various regions of the country such as Kurdistan, Kermanshah and Western Azerbaijan.

Habibollah Sarbazi, a Baluchi activists reports that Iran’s Revolutionary Guards have been arbitrarily stopping people in ad hoc check points and harassing them.

Sarbazi adds that ISIS has no base among the Baluchis of Iran and hence there is no justification for the state’s described treatment of people of Baluchistan in the past days. The south eastern province of Sistan-Baluchistan also has a large Sunni population.

Post the June 7th attack on Iranian capital, a video was released showing scenes from the attacks with assailants speaking Kurdish. After this ISIS claimed responsibility with another video of the assailants reading their manifesto in both Arabic and Kurdish, accepting responsibility for the attacks.

This is the first time ISIS has claimed responsibility for an attack in Iran. Human rights activists are concerned that the attacks will now be used as an excuse to further justify the Iranian government’s longstanding aggressive stance against Iranian-Kurds many of whom are among Iran’s Sunni minorities.

After the attacks, Iran’s Kurdish MPs issued a statement condemning the attacks by ISIS and stressing that no ethnic group should be linked and consequently penalized for the ISIS attacks adding that all Iranian people, including all its ethnic and religious minorities stand against ISIS. “Kurds have been in the forefront of the fight against ISIS and many have fallen in these ongoing fights in Syria and Iraq,” the MPs state.

Iran’s Writer’s Association also issued a statement stating that ISIS attacks “not only pose a threat to people’s lives but also provide governments with an excuse to further restricts social and civil liberties and the freedom of speech” . it goes on to urge the Iranian government to avoid such reactions.

Iran Human Rights Organization stresses that “indiscriminate executions and illicit crackdown in ethnic regions of the country by state security forces will only lead to further growth of violence and extremism”.

Many Iranian rights groups in the past weeks have called for an open trial of the suspects charged with terrorism in fair proceedings.

On June 7, individuals later linked to ISIS carried out two armed attacks on the Iranian parliament and the Mausoleum of Iran’s late leader Ayatollah Khomeini. Seventeen people were killed in the two attacks and 53 were injured.