Over sixty days into a hunger strike, jailed labour activist Jafar Azimzadeh is reportedly in grave health condition and Iranian judiciary’s lack of attention to his situation has triggered a wave of concern in social media. 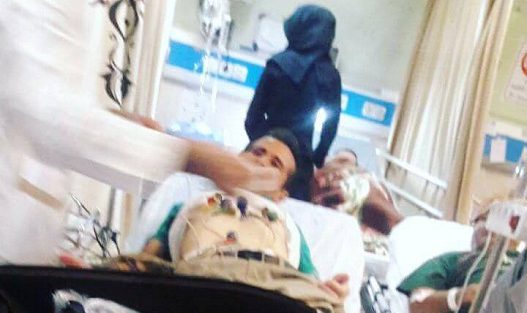 Meanwhile a rally call has been issued to join a protest on July 1 at 10 am in front of President Hassan Rohani’s office in Tehran. Human rights groups indicate that the call has been initiated by Azimzadeh’s friends and family.

Azimzadeh, according to the rally call which was issued on Tuesday June 28, has been on hunger strike for 62 consecutive days demanding that “security charges be eliminated from proceedings against labour activists”. The demand has been completely ignored by judiciary officials even though the labour activist is now in critical condition.

On Monday June 27, Azimzadeh reportedly passed out from the effects of the hunger strike. Activists then attempted to focus widespread attention on Azimzadeh’s situation by trending #FreeAzimzadeh Hashtag.

Azimzadeh’s wife and two sons are in dire financial situation as the labour activist is the sole provider for the family.

Jafar Azimzadeh is the head of the Free Union of Iranian Workers. In March of 2014 he was sentenced to five years in jail for “assembly and collusion against national security and disrupting public order”. He was also given another year for “propaganda activities against the regime”.

He has been serving his sentences since November of 2015. Azimzadeh denies the charges and insists that his labour demands for job security, equitable pay and right to mark International Workers Day cannot be interpreted as security crimes.

Iran Leader: I am sensitive towards 2009 “events”