Ceasefire announced in Yemen in advance of peace talks

The opposing sides in Yemen say they will observe a seven-day ceasefire starting Monday December 14 as a prelude to peace talks set for the following day in Geneva. 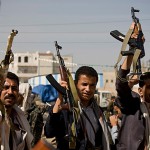 Reuters reports that Mohammad Abdul-Salam, a spokesman for Yemen’s Houthi forces, said: “Based on what has been agreed upon, there will be a halt of the aggression on the 14th of this month.”

He added that they have agreed to the ceasefire to allow for the delivery of humanitarian aid to their people.

Houthis now control northern Yemen and have been fighting against the government of President Mansour Hadi for the past nine months. The hostilities has left nearly 6,000 Yemenis dead.

In July, an earlier attempt to arrive at a ceasefire failed, but both sides have now said that they are determined to end the war that has devastated their country.

A Saudi-led coalition began airstrikes against Houthis last March in support of President Hadi, who fled to Riyadh when the Houthis advanced in the southern regions of the country. Since the beginning of the airstrikes, 300,000 Yemenis are said to have been displaced, and UN reports indicate that 78 percent of the Yemeni people are in immediate need of food, water and medical aid.

While Houthis condemn the Saudi air strikes as foreign intervention, President Hadi’s supporters say the Houthi militia has received financial and military support from Iran. Iran has denied the allegations.