The budget for Iran’s Department of the Environment is no match for its expenses and its many concerns: numerous international promises, the growing water crisis, droughts, a shortage of forest rangers, protection of the Iranian cheetah and other endangered wildlife species, repeated forest fires, 200 environmental projects in the Persian Gulf, the low-carbon economy, the crisis in lagoons and wetlands, the fight against dust particles and, last but not least, the drying out of Lake Urmia. 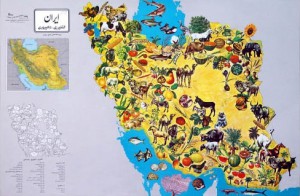 These are just some of the highlights of the Environment Department’s responsibilities. Meanwhile, most of the department’s budget is used to pay the not-so-high wages of its staff. Mohammad Darvish, a spokesman for the department, said recently that low pay in the department has destroyed all motivation.

He added that the department’s budget of 174 billion toumans is “pitiful”.

A PITIFUL BUDGET AND GROWING CRISES

In view of the painful state of Iran’s environment, it is extremely important to review the budget of the Environment Department, which is the most poorly funded Iranian government agency.

While the department’s budget has increased by 70 percent in the past two years under the Rohani administration, rising from 90 billion to 174 billion toumans, compared to the rate of environmental destruction in the country, this figure is insignificant.

The inadequacy of the budget becomes more apparent when we see it in the light of the total national budget of 219 trillion toumans, with an administration that is presenting itself as a supporter of environmental issues. A significant portion of the department’s budget is used up to pay the wages of its 6,000 employees. Even the budget of the Policy Council for the Seminaries of Sisters is 20 billion toumans higher than the budget for the Environment Department.

Mohammad Darvish, Director of Education and Public Participation for the Department of the Environment, reports that the budget for the Gatvand Dam, a national crisis that is elevating the salt content of Karoon River and destroying agriculture in Khuzestan, was 20 times the total budget of the Department of the Environment. He adds that “recovering from a wound such as the drying of Lake Urmia” requires at least a budget of 15 trillion toumans.

THE PROCESSION OF ENVIRONMENTAL PROBLEMS

The Rohani administration has implemented a number of plans to reduce greenhouse gases. Two hundred projects alone are aimed at cutting 70 percent of oil and gas pollution affecting the air, soil and water in the Persian Gulf region by 2020. They include the strict observance of waste disposal standards by oil and gas facilities and, most importantly, improving gasoline quality.

The government has also presented the United Nations with its “Low Carbon Economy” plan, which must be implemented by 2020.

Plans addressing environmental projects are weighed down by lack of adequate equipment and technologies. This has limited Iran’s ability to tap into renewable sources of energy in past years. International sanctions have been a strong factor contributing to this technological weakness. With the removal of the sanctions, there is hope that the government will invest in the development of renewable energy sources, that is if the funds for such developments are secured.

The removal of sanctions will present the government with the opportunity to invest in much-needed waste management and wastewater technologies, water-filtration equipment, the renewal of public transportation vehicles and systems, forest fire-fighting equipment and improving automobile standards. The question remains whether the government will choose to fund such investments.