A former ministry of health official reports that Iran’s legal penalties against alcohol consumption are preventing people from seeking help with addition. 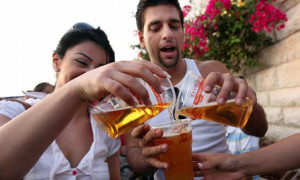 In a report on Addiction Treatment and Prevention centres in the country, the Fararo website quotes former official Farid Barati saying that individuals need to be assured that seeking help at the centre will not lead to charges against them from the judiciary.

Barati said: “Fear of being flogged is keeping many alcoholics from seeking help at addiction treatment centres.”

Consuming alcohol can carry a punishment of up to 80 lashes under Islamic Republic laws.

Barati stressed, however, that patients should not be concerned because in a meeting with members of the clergy, he was assured that since an individual seeking help at treatment centres has a goal of giving up alcohol, he or she cannot be given the punishment stipulated by Sharia law.

Despite the legal ban on alcohol consumption, reports indicate that 200,000 people in Iran are involved in the sale of alcoholic beverages. Iranians between the ages of 17 and 35 are said to comprise the biggest part of the market for alcohol.