Zamaneh Media’s fourth annual labor report, which covers issues related to workers’ rights in Iran from May 2021 to March 2022 is ready for download. 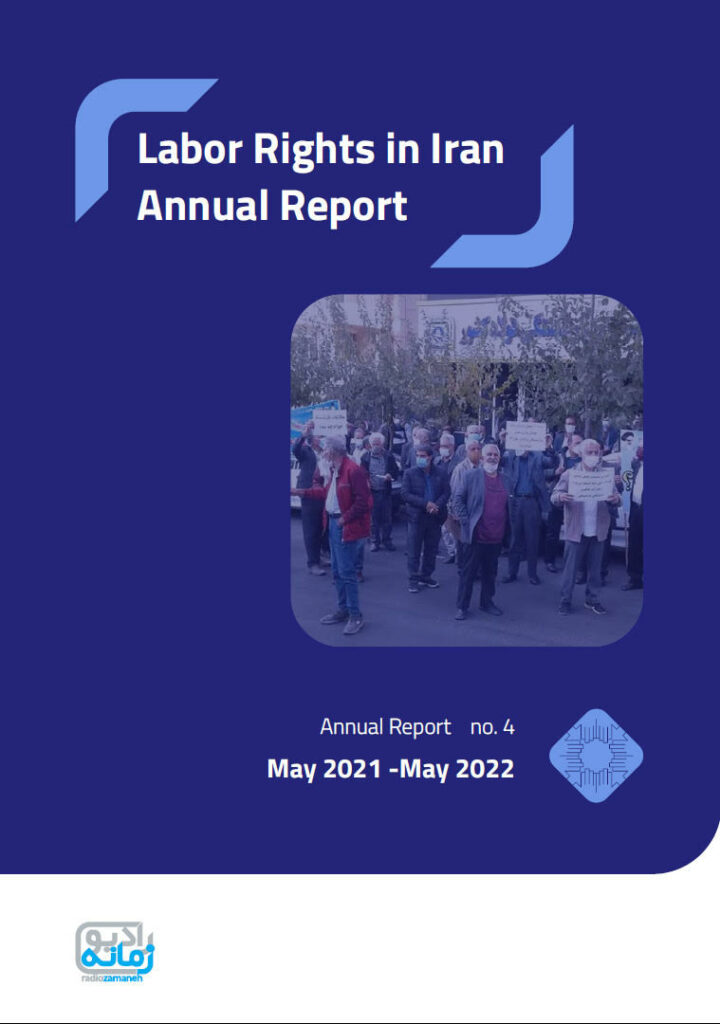 Inflation in the past two months of 2021 hit 43.7% and it was over 60% for food and beverages.The real inflation rate for consumers is higher than the one reported by official institutions in Iran. Last year, the prices of some food items more than doubled. The rising inflation, food prices, and unemployment manifested intself when the Ministry of Cooperatives, Labor, and Social Welfare announced that about one-third of the Iranian population is below the poverty line. 31.8% of the people in urban areas and 50% of the population in rural areas are below the absolute poverty line.

Of those who are employed, more than half are employed in informal jobs, meaning they did not have an employment contract, social security coverage, or the approved minimum wages. The number of workers in informal occupations was estimated at over 13 million in 2021.

In March 2021, the Supreme Labor Council set the minimum monthly wage at 2,652,000 tomans. This is while the cost of living was estimated at 6,890,000 tomans. The continued wage repression of workers has incited protests by various labor groups throughout Iran.

On average about 3.5 union and labor rallies were held in different cities of Iran every day in 2021. At least one labor or union strike took place less than every two days. News media and labor rights groups recorded 618 rallies and 339 strikes in the past year. Deferred and insufficient wages were the leading causes of labor protests.

The strikes of oil and gas contract workers that began in mid-June 2021 at the Bidkhoon Refinery in the Assaluyeh Special Energy Zone and quickly spread to more than 100 refineries and units throughout Iran was a significant labor strike of 2021.

On December 13, 2021, teachers staged a nationwide rally in 80 cities across the country that was unprecedented in the history of union protests over the past three decades. The government threatened, summoned, or arrested large numbers of teacher’s union members in various cities.

In Isfahan, farmers rallied for nearly one week to protest the lack of water supply. These protests spread to the neighboring provinces of Chaharmahal and Bakhtiari as well as Lorestan. Police and security forces arrested more than 200 people and shot many, resulting in injuries and death. Last year, farmers took to the streets in different parts of Iran, particularly in Khuzestan, Isfahan, Chaharmahal and Bakhtiari, and Hormozgan. One of the largest protests against water shortages took place last summer in Khuzestan and lasted at least two weeks

As labor protests spread, the government intensified its repression of workers, trade union activists, and labor rights defenders. Over the past year, many members of teachers’ unions, the Tehran Bus Syndicate, the Free Union of Iranian Workers (FUIW), the Coordinating Committee for the Establishment of Trade Unions, and other labor rights defender organizations have been summoned, detained, and imprisoned.