Protests of retirees in at least 10 provinces in Iran in December 2020. The placard read: "Pensions are not comparable to the inflation rate".

Zamaneh Media’s special report on the situation of pensioners and the labor rights of retirees in Iran is available for download.

In 2021, 6.7% of Iran’s population was over 65 years old and the government of Iran estimates that in the next 15 years, this age group will make up about 11% of the country’s population. In Iran, the retirement age is 60 for men and 55 for women. Anyone can retire after 30 years of paying insurance premiums, regardless of how old they are. 55% of the senior citizens in Iran do not receive pensions and up to 35% of them live below the poverty line.

Download the Zamaneh Special Report on the Situaton of Retiree’s in Iran: 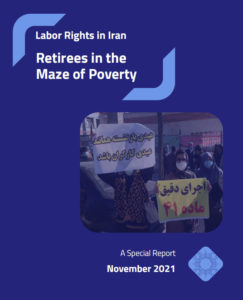 The Supreme Audit Court of Iran has announced in the budget deduction report that only 11% of retirees receive more than 10 million tomans per month (about $334 at the current rate of 1 USD = 30,000 tomans). 89% of retirees have a monthly salary of between 5 and 10 million tomans, a figure lower than the minimum subsistence basket estimated by the wage committee of the Supreme Labor Council. In November 2021, this committee estimated the subsistence basket at 11.5 million tomans. According to a study by the Saba Institute, affiliated with the Civil and Military State Fund, 86% of retirees covered by the pension funds do not meet their living expenses, and they are forced to seek a bank loan or borrow from relatives.

Over the past decades, the government’s fiscal policy included wage suppression, nonpayment of debt to pension funds (especially the Social Security Fund), clearing its debt with the stocks of loss-making companies, and reducing social welfare programs. These policies have left the Social Security Organization (SSO) and other subordinated pension funds in a permanent “risk state.” The government’s debt to the SSO has reached more than 340 trillion tomans (USD 11 billion – at the current rate of 1 USD = 30,000 tomans).

As a result of this, Iranian retirees are receiving pensions that are lower than the poverty line and have been staging protests in several cities in Iran in the past two years. In the first seven months of this year (the year 1400 of the Iranian calendar beginning March 21, 2021), retirees from the Social Security Fund, the Steel Fund, the Radio-Television Fund, the Shiraz Telecommunications Company Fund, the Tehran Bus Company Fund, and Islamic Republic Airlines Fund rallied several times in Tehran and other Iranian cities. The main demands of the retirees are to adjust retirement salaries, eliminate discrimination in the payment of pensions, provide full and free health insurance, and increase retirement salaries based on the actual inflation rate and livelihood basket.

Iran’s social security system is in crisis due to a change in population composition over the past decade and ongoing economic problems such as inflation, recession, a decline in the working population, and structural corruption and this will amplify the problems retirees face in Iran in the years to come.