Between 1 May 2019 and 1 May 2020, unpaid wages, layoffs, and unemployment were the most recurring labor news in Iran. Zamaneh Media has published its second annual labor report which gives an overview of the situation of Iranian workers and labor issues in the past year.

The second annual report like the first one is available both in Persian and English on May 1st, International Workers’ Day. You can download the reports from here: 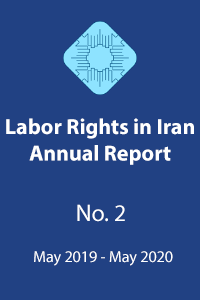 Floods in March 2019 caused 25 casualties and financial losses in 25 provinces of Iran, leaving at least 30,000 workers unemployed. The Iranian year 2019, ended with the decline in oil sales to its lowest level in four decades, with many oil and gas projects shut down or on the verge of shutting down.

In November 2019, after a sudden increase in the price of gasoline, a massive outburst by the unemployed, workers and marginalized urban groups erupted and engulfed Iran, The rage of the nation-wide November protests in Iran, was soon drowned in blood, as the security forces killed at least 350 protested and arresting more than 8000.

With a continuing economic crisis, workers’ protests and strikes have continued over the past year in various economic sectors and in different parts of the country. Deferred wage demands are still the main reason for workers’ protests in different parts of Iran. Non-payment of insurance premiums, cessation of production capacity, dismissal of workers, lack of job security, privatization, non-implementation of the job classification plan, and the arrest and suppression of union activists are among the reasons for the labor protests.

Aamid the COVID-19 pandemic, massive layoffs and unpaid wages, there was not much room to celebrate the Iranian new year 1399 (21 March 2020). With the outbreak of the coronavirus in February 2020, the wave of forced leaves and layoffs had intensified. Street vending was banned, borders were closed, kulbars (human mules) lost their jobs, and the weakened Iranian healthcare system collapsed in the shadow of privatization.

The outbreak of the coronavirus has also raised concerns among children rights activists about child laborers in Iran, who continue to work amid the pandemic without gloves and masks and in unhealthy, non-standard conditions – mostly in garbage collection and recycling yards.

Aside from the annual report, Zamaneh Media also publishes its Labor Newsletter in Persian and English every two months. The focus of the newsletter is safety and health at work, discrimination in the workplace, labor laws, women issues in the labor market, working children, contract issues, unemployment, postponement or non-payment of wages, and matters related to labor organizations.