On the occasion of Zamaneh Media’s 10th anniversary these women, who all have been involved with the women’s movement in Iran, gathered in Amsterdam to take part in a panel discussion. 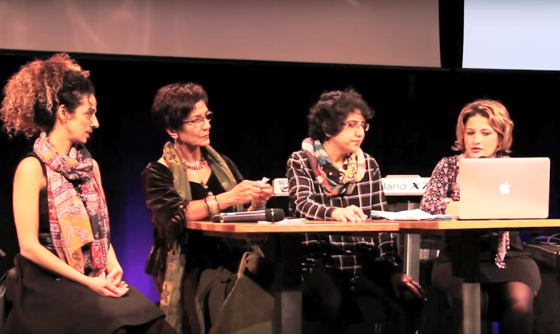 Qyasi talked about discursive construction of norms that prohibits women from political participation at an executive level in the government.

Shojayee argued that there is strong evidence that the discrimination that many female politicians face in Iran is rooted in the legal obstacles to women participation in the Iranian Family Law: “the law the gives a woman’s husband the power to inhibit her from working.”

Within the establishment the group also talked about the challenges that women face coming from religious or traditional conservative background. Lack of gender sensibilities within the Iranian politics was also discussed.

Alinejad as a former parliamentary journalist however, raised this point that women in politics in Iran are not necessarily working towards the demands of women or the Iranian women’s movement.

Recalling stories from her time as a journalist working in Majlis, the Iranian parliament, she said that all the feminist groups were red-lined and she could not associated with them if she wanted to continue her job as a parliamentary journalist. However one day she went to an underground meeting with Mansoureh Shojayee and realized the freedoms the feminists were fighting for were never included in her coverage of the parliament and female parliamentarians.

Alinejad now believes that the only way female politicians in Iran can be represent the Iranian women and their demands is through the empowerment of Iranian women, to raise their voice and make their demands matter in politics: “politicians always ignore small issues. If we want more women in politics, we have to know what we want from them and we have to let ordinary people inside Iran decide that…Make those politicians responsible about women.”

The panel decided that although many Iranian women’s rights activists have been pushed to exile, the women’s movement is still alive and can benefit from the work of those are in Diaspora as well as those who are inside Iran.

May God Bless this Enemy