The Evin Memorial Campaign is an initiative supported by Radio Zamaneh to build a monument in words and preserve the memories of those who suffered in and through Evin Prison. The campaign is also in defiance of those who perpetrated those sufferings and are now planning to clear away every trace of it by tearing down the building and replacing it with a recreation centre rather than a national museum celebrating resistance and the struggle for freedom. Bijan Moshaver is a physician and medical scientist involved in cancer research. In Dutch society he is also known as a political and social activist and is currently a member of the Zwolle City Council. The following piece recounts his memories of imprisonment in Evin Prison during his university years in Iran.

Winter of 1982, about six months into my arrest. It was cold and snowy and I had just recently been moved from the the notorious solitary confinement section 325 to the Prison Hoseinieh.

I was confined to a cell of the following dimensions: 4 metres by 5 metres to be shared by 40 people. 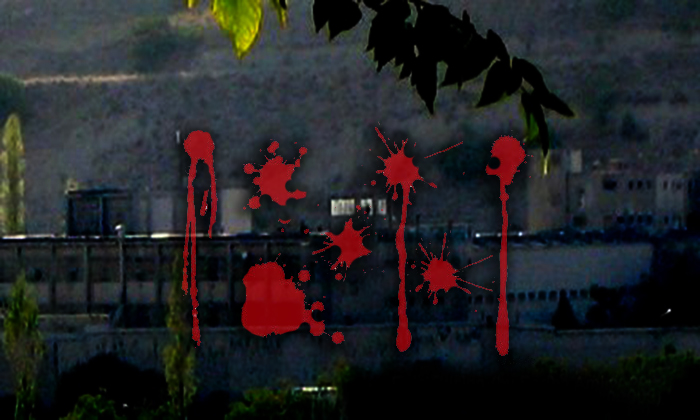 The heater was out of order and, despite the crowding, we were cold. We would crawl under the blanket to keep warm. Taking a shower was torture. As snow fell behind the windows, we had to shower with ice cold water; wash and shiver. Many of our cellmates had become sick. The food was not nutritious. Most of the time all we would get was bread, cheese and cucumbers. Each of the 40 prisoners could only have 10 minutes in the washroom, and there were only five washrooms available, which meant that many of us were suffering from kidney and urinary tract complications.

For sleeping there was not enough space to lie on our backs; we had to lie on our sides in order to fit in the space. There were no doctors or assistance for the sick. If anyone was in pain, the most they could expect was pain medication so that, as the prison guards put it, they would “shut up quicker”.

The deadly presence of Lajevardi
One night at around 10 PM, the cell door opened and Asadollah Lajevardi, the Revolution’s Prosecutor at the time, together with a number of Revolutionary Guards and prison officials, entered the room. Suddenly panic prevailed. He addressed us saying: “Now, now! Look here! Comrades and hero fighters, you resemble your late sickly leader, Mohamad Mossadegh under your blankets. Get up; you must all stand up.”

From experience, we knew that something had probably happened outside; an assassination attack requiring vengeance from the regime. With an ugly grin, Lajevardi began sizing up the prisoners and, after a few seconds, just pulled out 12 prisoners and sent them out of the cell.

A dull, agonizing feeling told us that we would never see them again. It was a strange and painful scene. In those moments, the prisoners were like trapped birds in front of a bloodthirsty beast. Being chosen for death by mere chance; there were no rules or regulations, only the desire and will of the chief prisoner.

The selection of the people for death was done within two minutes. We did not even get a chance to say goodbye to our friends. Once they exited the room and the door was closed, a terribly bitter silence overwhelmed the room.

Those twelve did not even get a chance to collect their belongings. Our eyes were filled with tears. A deep and emotional friendship had quickly developed among the cellmates. In an instant, we felt the emptiness they had left behind. Pain and sadness weighed down our spirits.

Executions were usually carried out at midnight. We first heard fusillades and then a series of point blank shots. By counting the shots, we would figure out the number of people facing the firing squad.

That time they took 12 of our cellmates, and about two hours later, around midnight, we heard shots of death. As usual, we counted the single shots. That night 120 people were executed. Clearly, Lajevardi had taken many people from the other cells in the Hoseinieh section that night. Again we felt that bitter silence. Many had covered their heads with the blanket, quietly weeping.

None of us knew if we would survive the next day. Seeing the bloody bodies of the tortured returning from interrogations or having them not return at all, having no means of defence, no access to a lawyer, to the most basic human rights or to the world outside, constantly reminded us that our future was dim and unpredictable. The stress was so intense that many fell victim to mental disorders.

Against oblivion and in defence of human rights
After my release from prison in spring of 1983, I left the country. I began a new life abroad. But I have never forgotten my days of imprisonment. I was determined to turn to the defence of human rights. To fight for these rights, it is vital to preserve the memory of those trampled rights; the rights that were trampled by torturing, executing and mistreatment in the manner that was done in Evin and other prisons of the Islamic Republic. Those who come after us must learn about these trampled rights in order to be respectful guardians of human rights and remain sensitive to their violation.