A fire involving a kerosene heater at an elementary school in Hashtrood resulted in a teacher sustaining serious burn injuries. 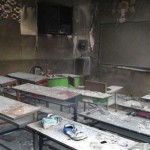 Fars News reported on November 30, the fire at Alipoor School in Hashtrood district scared the students and caused burns to the hand of their teacher who was trying to protect the students from the fire.

Mohammad Salimpoor, a Hashtrood official told ISNA that Hashtrood’s Board of Education is at fault because the head of this office had announced that there were no sub-standard heaters in any of the schools in Hashtrood.

He added that Ministry of Education has told them not to let the news of the fire leak into the media.

This incident occurred in the face of an announcement made yesterday by Ali-Asghar Fani, Iran’s Minister of Education saying: “This year 40 thousand classrooms will say goodbye to kerosene burning heaters and we have planned to completely upgrade the heating systems in schools within the next two years so the students have no worries about the heating.”

Three years ago in a classroom at Shin Abad School in West Azerbaijan 12 students suffered burns of up to 60% during another fire caused by a Kerosene heater.

Morteza Raisi, Head of the Organization for Renovation and Equipping of Schools in Iran had recently said that 75 thousand classrooms in Iran are devoid of standard heaters. “This number means that in these classrooms at least 200 thousand students are still using oil and gas heaters which put their lives at danger.”