Ali Asghar Faridi, an independent Iranian journalist who had been held with his family in a refugee camp in the Czech Republic, was issued a release order on October 7, 2015. The order takes one day to be implemented.

Ali Asghar Faridi, who has collaborated with Radio Zamaneh in the past, had left Turkey with his wife and two children to seek asylum in Europe. On September 11, 2015, they were arrested by Czech police in Prague as they were making their way to Germany.

Kambiz Ghafouri, a journalist based in Finland, arrived in Prague five days later to try and secure Faridi’s release.

The following is Ghafouri’s report on refugees in the Czech Republic and the experiences of the Faridi family there.

The destination of most of the asylum seekers leaving Turkey for Europe in recent months is Germany or Sweden. Those who take sailboats from the Turkish coast toward one of the Greek Islands continue on their route through Macedonia, Serbia and Hungary to reach Germany or Austria. 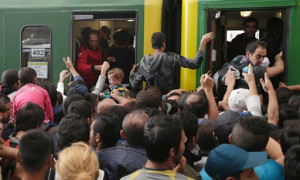 Some asylum seekers, however, end up in the Czech Republic as a result of getting lost on unfamiliar routes, falling for the false promises of human smugglers or even taking the wrong train. Faridi and his family are among those.

When Faridi and his family were picked up by Czech police in Prague, efforts to release them got underway. The world media and human rights activists were unaware that hundreds of forgotten and unidentified asylum seekers were being held in Czech prisons called camps.

A few days after Faridi and his family were arrested, while a number of human rights groups such as Reporters Without Borders were sending letters to the Czech government, I arrived in Prague to following up on his case. The camp where they were being held is called Bělá pod Bezdězem and is located 100 kilometres north of Prague.

After an hour’s ride away from any residential area, a facility unlike any refugee camp in Western Europe and bearing all the signs of a prison came into view in a completely wooded area. 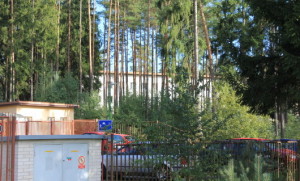 All photography was prohibited, even from the parking area and the door of the facility. They not only removed all of my audiovisual equipment but they also took any metal objects including coins and keys from me. The forms I had previously completed for officials in Prague were not recognized at the facility and I was given new forms to complete.

They searched everything I had and took me to a room reminiscent of prison visitation rooms. The visit could not be described as an “in-person visit”. The room were glassless cabins where you could face the person you were visiting but not sit beside them. An officer was also in the room. I cannot tell you why he was there, sitting on a chair a metre away from us. Although he was present all through the visit, it is very likely that he does not understand Persian. Meanwhile, the rooms were all equipped for video surveillance.

I discovered that the Faridi family had taken the Vienna-Berlin train and did not realize that the train passes through Prague. Faridi, his wife, his 14-year-old son and six-year-old daughter were arrested by the Czech police and were immediately subjected to their first bit of shocking treatment: the children were separated from their parents for transfer to the police station.

The mistreatment of detainees in the camp is a common occurrence. For instance, Faridi’s six-year-old daughter got her head slammed into the wall for dropping her orange peels on the ground.

Conversations with Czech reporters and activists made it clear that the public and media are not aware of the existence of these camps. My descriptions moved a number of Czech reporters to prepare a report on the camps, but letters from a number of prominent international figures in support of the Faridi family had possibly raised alarms with camp officials, and they refused to allow the reporters any visits.

According to a refugee lawyer, the Czech ministry of the interior recently cut off the funding to a reputable refugee organization that defends refugee rights in court and has criticized how police treat asylum seekers.
Finally, a Czech MP informed about the situation used his authority to secure a visitor’s permit to the camp and took a reporter along with him.

The visit resulted in a report in the Czech daily Respeckt headlined “The Secret Prison for Asylum Seekers in Bezdězem”. It describes the situation of 10 asylum seekers in the facility and includes an interview with Ali Asghar Faridi.

Faridi’s release was issued on Wednesday October 7 as a result of pressure from various human rights groups and prominent international figures, whom I am not permitted to identify. Despite this victory, the violation of the rights of asylum seekers persists in the Czech Republic camps.

A young asylum seeker who has been getting shoulder spasms due to stress has, for example, been labeled as a mental patient and put in isolation. A woman in the eighth month of her pregnancy remains incarcerated and in limbo. A child suffering from shortness of breath was separated from its begging parents because the authorities deemed the birthmarks on the child’s body to be signs of abuse and refused to return the child, despite a medical confirmation of the true nature of the marks.

In prisons that are called camps for asylum seekers, there are human beings who have fled war and chaos in their countries in the Middle East. However, in peaceful Europe, they have been trapped in a prison unknown to most people.