Of tens of women on the streets of Iran who started to take off their veils during the mass street demonstration of January 2018 to object the compulsory hijab law of the country, 29 were arrested. But most recently on 15 Feb, another women showed up to the original location of the first women who took off her veil: a power box on Enghelab street in Tehran.

Azam Jangravi who had posted a message of protest on her social media accounts was live broadcasting her protest when police came to arrest her. She was holding a white veil in her hand when she was taken down from the power box violently by the officers. Some in the crowd that had gathered around Jangravi resisted the officers but she was ultimately taken into custody.

Footage of Azam Jangravi getting arrested:

The Shining Star of Enghelab Street

“From the moment I left the house till I reached the platform, it was as if my heart was beating in my mouth. It was not just fear. Of course I was scared because it was not clear what was going to happen. But it was not just fear; I felt excitement and a series of other unfamiliar feelings. When I went up on the platform, attached my headscarf to the stick and held it up, then my heart really started racing.” 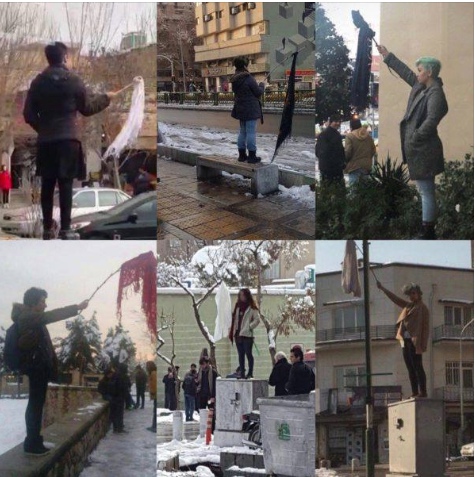 This is Setareh’s* description of her experience participating in the recent demonstration of resistance against compulsory hijab in Iran. On Monday January 29, a number of brave women like Setareh climbed onto public platforms in Tehran and made a flag of their headscarves challenging the four decades of Islamic Republic authority which has forced Iranian women to cover their hair in public. Setareh is one of these women who have come to be known as the women of Enghelab Street. She is 25 years old and has recently graduated from university.

When I ask her what made you dare do such a thing, she says: “Vida Movahedi did it and then we all thought what a fantastic move! There was no movement behind it; no White Wednesdays campaign rallying people to do such a thing. She was just a very brave soul. She dared to do it and she was arrested and she had to pay for it and probably is still paying for it. But I think the second person did a more vital job. She transformed it from a mere event to a movement. She saved it from being just a legend and turned it into a civil movement. When I saw that someone has repeated it, I realized that the story goes on. Then I saw photos of the third woman in Ferdowsi Square. I told myself I have always been against compulsory hijab and this is a kind of movement that does not need to organize and gather people and groups. It is one of the few protests that you can do on your own. So I put on my clothes. Up to the platform I wore my headscarf on my shoulders and then the rest of the story.”

Setareh holds out for half an hour on the platform and receives a number of reactions. “Most people would just stop and look and then go. Some men would throw me dirty comments. One was standing beside be pulling on the corner of my coat and asking me to come down. Another person came and took the first person away. One came and told me that he was also critical of certain things in society but this was not the right way to go about fixing them. I did not listen to anyone. I just held my gaze to the front. Some women would give me strange looks and start whispering in each others ears. Some young men and women would smile and give me the victory sign which was very heartwarming. Taxi drivers were also excited and shouting bless your heart! You’re so brave!”

Later Setareh spots a couple of policemen exiting a nearby building so she leaves the spot and walks away.

I ask her what dangers await her: “All of us probably know that even if we are not arrested on the spot, we can be identified from photos that are taken while we are there. There will probably more threats as the movement picks up momentum and there are more women doing it. We all understand the possible costs of such actions but we believe in it so we cannot just sit around. You can’t just expect others to take action; you have to do your part.”

I asked Setareh about her personal motivation.

It is not just an issue of hijab. A regime that interferes in such basic and rudimentary matter of an individual’s life as their outfit, only attests to being a dictatorship in social and political matters. There have been numerous forms of protests to compulsory hijab but I believe this is the most civic and beautiful manifestation of the protest so far.

Setareh’s family are proud to support her but she recognizes that this is not case for everyone and she observes: “You could also have dictators in you own family. For those who don’t have the support of their family, it is much harder.”

Setareh says this protest also needs and is gaining the support of men who realize that compulsory hijab is an insult to them as well. She also speaks of the support of women who chose to wear the hijab but do not believe in enforcing it on others.

She stresses that she will not invite others to join the protest or look down upon those who do not participate in this form of its manifestation conceding that these actions could end up being very costly in terms of how the government deals with protesters.

She says a violent reaction by the authorities is not a far fetched idea adding that we could see a wave of knife and acid attacks on women. She observes that those arrested are already dealing with heavy bails which could be followed by heavy sentences. The least that can be expected could be a more violent presence of the morality police on the streets.

Setareh now lives in a world of hope and fear. Since Monday she has not covered her hair in public and has worn her scarf on her shoulders when going out like many others. She says with a hopeful tone saying: “I have often heard that the next revolution in the country will be a women’s revolution. If this protest fails another one will be born from its belly. The International Women’s Day is approaching. Men and women might take to the streets and show their protest to compulsory hijab in a different form. No one knows. A few days ago no one would have thought that Vida Movahed’s actions will get replicated in this manner.”

*Name changed to protect the subject

300 Iranian Dervishes Remain under Arrest after Clashes with Security Forces