Rieneke Van Santen: Zamaneh is the media of the margins 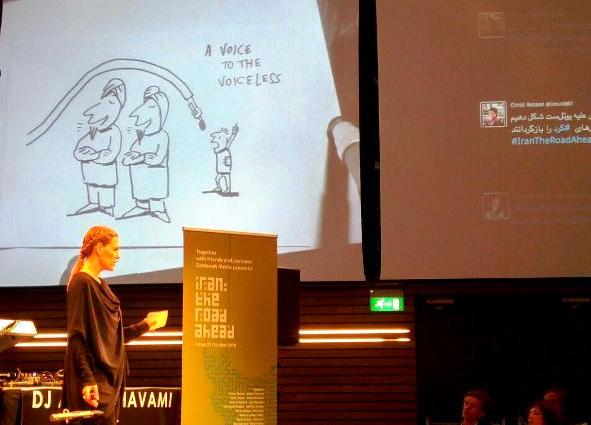 Radio Zamaneh, a media organization that was founded in 2006, has evolved its unique media model and believes “in a strong community and high participatory level of news gathering and sharing,” says Rieneke Van Santen, the Executive Director.

According to Van Santen, Zamaneh has moved over the years “from a top-down information dissemination model” into a circular model involving three platforms that strengthen each other. They include the professional journalism platform, Radio Zamaneh, education through Zamaneh Academy and citizen reporting on Zamaneh Tribune “which is also used by civil society organizations to advocate for their causes.”

In order to better reflect activities of the above-mentioned platforms, on the occasion of the 10th year anniversary festival called “Iran: the Road Ahead”, Van Santen officially presented the new name under which they will be operating: Zamaneh Media Foundation.

The model Rieneke Van Santen is referring to has been implemented and evolving in the past six years and is constantly being reshaped to meet the demands of the Iranian audience to “increase access and reach into all regions inside Iran, even the remote and underexposed areas.”

Yet even with the adaptation of a media participatory model, Van Santen believes that Zamaneh’s mission founded in August of 2006 is still very much alive today: “To be a voice to the voiceless”.

She says Zamaneh is the media of the margins: “we cover stories of taboos, of the minorities and the peripheries away from the centers of power.”

Rieneke Van Santan, whose speech was a tribute to ten years of good journalism, devoted fact-checking agendas, educational programs and empowering of the civil society in Iran, thanked all contributors who have been involved with Zamaneh in the past ten years: “Zamaneh has become an organization where everyone involved works hard and professionally towards the same goal, and I believe we do that with respect and appreciation for each other and also a lot of love.”

She also expressed gratitude to the steady, loyal and active audience base that bring over 14 million online visits per year for Zamaneh Media.

Zamaneh’s journalism is built on strong analytical reporting that covers the story behind the news and that promotes and strengthens independent critical thinking; this is of utmost importance for Iranian society according to Van Santan.

Iranian authorities prosecute protesters at the Tomb of Cyrus