Iranian authorities prosecute protesters at the Tomb of Cyrus

Shiraz prosecutor general announced on Monday that those responsible for the gatherings and protests at Pasargard, the Tomb of Cyrus the Great on the weekend have been arrested. 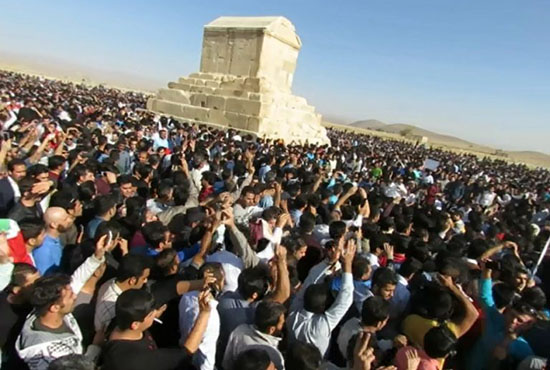 October 29 has been recognized as International Cyrus the Great Day. On Friday, a large group of Iranians gathered at the site of the first Achaemenid king’s tomb to mark the day despite report from Human Rights Activist News Agency that the site was under strict state security measure on that day.

Paying tribute to the founder of the Persian Empire and a symbol of the country’s fallen political system of monarchy has raised alarms among the senior members of the Islamic Republic establishment.

A senior Shia cleric in Qom, Hossein Nouri Hamadani immediately reacted to the gathering saying he is in awe that such a gathering could even take place under the watch of Islamic Republic’s eye.

“I am flabbergasted that people could gather at the tomb of Cyrus and we just sit and watch them chant the words we reserve for the great leader of the Revolution,” Hamadani said referring to Ayatollah Khomeini the late leader of Iran’s 1979 Revolution that toppled the Shah of Iran and replace the Monarchy with the Islamic Republic system.

He maintained that the gatherers should be regarded as anti-Revolutionaries and prosecuted for their actions slamming the country’s security institutions for allowing such gatherings to take place under their watch.

On Monday Iranian media reported that the judiciary has moved against the perpetrators of the gathering and charges have been laid against them.

Ali Salehi, Shiraz prosecutor announced today that the actions of the leaders of the gathering was already under investigation by the state intelligence and security bodies adding: “The initiators of the inappropriate slogans against the regime’s values have been arrested.”

Mohammadreza Aali Payam, Iranian poet and satirist, who writes under the alias Haloo, is one of the individuals arrested at the gathering at Pasargad. Aali Payam was severely beaten during the arrest and was later hospitalized for treatment of the injuries inflicted during the arrest. Aali Payam recited some of his work at the gathering and a clip of his recitation was posted in social media.

Cyrus the Great remains a hero to many Iranians as a just and benevolent king promoting religious tolerance and human rights across his vast empire 2,500 years ago. The site of his tomb in Shiraz has long been a top tourist attraction for both domestic and international travellers.

The Islamic Republic has maintained a hostile relationship with the country’s history of monarchy but the international stature of the sites connected with the Achaemenid empire has prevented the government from destroying these sites although there have been many reports of the state culture and heritage institutions failing at the upkeep of these sites.

Rieneke Van Santen: Zamaneh is the media of the margins