The Rohani administration has reacted to the announcement that the police department plans to deploy secret police to monitor the public’s social behaviour. On his trip to Semnan, when asked about the 7,000 undercover morality police personnel being deployed, he said the executive branch was not involved in implementing the plan. 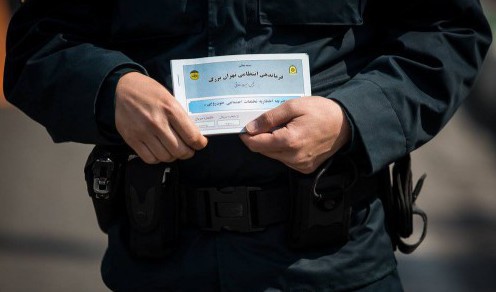 Rohani went on to say that his government is committed to its campaign promises to provide social security for the public and will use all its power to keep those promises. He raised the importance of human dignity, saying: “God has blessed human beings with dignity, and this dignity precedes religious beliefs. The dignity of our people must be protected; we have righteous and responsible people.”

He went on to add that what people wear and how they behave in society are cultural issues and he stressed that cultural matters are best addressed through cultural initiatives.

On Monday April 18, the Tehran police chief announced that his department has deployed 7,000 “undetectable security personnel” in the capital alone to enforce the “plan for moral security”. Chief Hossein Sajedinia said these officers are under orders to confront “hijab (Islamic dress code) violations, noise pollution, harassment and any lack of hijab in vehicles”. He added that these officers are both male and female and are not uniformed in order to avoid easy detection. He added that these officers will be deployed in various parts of the city to inform the police of such violations.

In his campaign speeches, Rohani expressed serious reservations about the actions of the morality police in Iran. The morality police often detain and at times arrest women for hijab violations and similarly confront young men and women about their choice of music in their cars or their behaviour. Rohani promised that his government would provide a feeling of security to the public, saying: “Our women are responsible for their own hijab and modesty.”

Shahindokht Molaverdi, Rohani’s advisor on women and family affairs, was previously quoted as saying that 27 government bodies were charged with implementing “the legislation to promote hijab and modesty” including the police. The police should have been the last resort, according to Molaverdi, but due to a lack of initiative from other officials, the police have taken the lead. She stressed that the administration is bent on keeping the hijab issue in the cultural arena and prevent it from becoming a security issue.

Despite these statements from the administration, the morality police remain highly active on the streets of Iran, consistently harassing Iranians for their appearance and behaviour in the public.
The police department has defended its plan to deploy undercover officers by saying there is demand for greater monitoring of hijab in public. It added that the deployed personnel will inform police officers of violations and stressed that these undercover agents all carry the necessary identification, despite being in plainclothes.

The Rohani administration’s attempts to provide greater civil liberties to the public have been generally met with a backlash from the far right with calls for a crackdown on the public.

Voting begins in second round of elections