Protests sparked by abuse of dog leads to violent arrests

Reports from Iran indicate that protests staged by animal rights activists in front of Parliament on Wednesday February 25 were met with a violent reaction from the authorities, and a number of the activists were beaten and arrested. 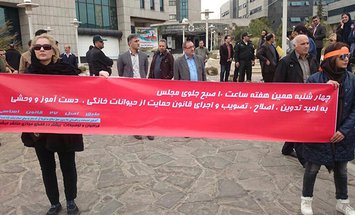 Eyewitness reports indicate that the protesters, who had gathered to challenge the absence of legal provisions against the abuse of animals, were met by plainclothes forces along with the police.

On Monday, hundreds gathered in front of the Department of the Environment to demand better protection for animals.

The department announced that the dog’s assailant has been arrested and the animal was under doctors’ care in Golestan Province.

Animal rights activists say violence against animals persists due to the lack of adequate laws to protects the rights of animals.