Police stopped a tour bus en route to Naeen in Isfahan and cut the tour short for what the officers described as “the intermingling of men and women”. 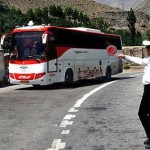 Tour organizer Karim Shadfar told ISNA on Wednesday December 23 that the police stopped the bus at 5 AM while it was on its way to the Varzaneh Desert, holding them for over six hours at temperatures below freezing. He stressed that 80 percent of the travelers were relatives.

He added that after six hours, morality police arrived and told them the bus could not pass through Naeen during a “religious mourning period” with “male and female passengers”.

Shadfar indicated that Naeen Police have doled out similar “insulting” treatment in the past, calling it unacceptable and arbitrary.

He said his company has pursued the matter with both the intelligence and interior ministries, but despite their assurances, he has seen no change in the problem.

“If tourism is a crime, then it should be defined as such so that everyone knows where they stand,” Shadfar said.

Isfahan has been at the centre of several controversial incidents regarding the issuance of permits to segregated tours over mixed-gender tour groups.