Users of the Telegram app in Iran report that recently they have been receiving certain messages that prevent them from sending certain information. This appears to mark the beginning of the so-called “smart filtering” of Telegram. 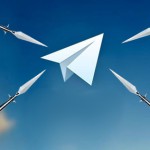 Shahrvand reported on Tuesday December 22 that it appears that certain words trigger the blocks and prevent the sender from sending messages containing those words.

Prior to this, before the widespread use of social networking sites in Iran, mobile companies let the government block text messages containing the name of the Iranian opposition leader in the election protests of 2009 and the term “Green Movement”.

Shahrvand writes that the current “smart filtering” being used on Telegram appears to work in a similar manner, blocking messages that do not fit the accepted patterns.
In the past month, Iranian hardliners were intent on getting the authorities to block access to the Telegram app.

The Committee for the Identification of Criminal Content met in late November to review the matter. They decided to allow time for Telegram to set up an acceptable filtering system for users in Iran, rather than block the whole app.

Fifteen million Iranian are said to use Telegram, and the introduction of new communication channels appears to have triggered serious concern among Iranian authorities opposing access to the app.