The director of the Contagious Diseases Department of Iran’s Health Ministry says Iran’s death toll from the flu virus has reached 46. 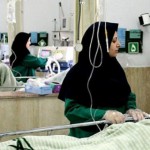 ILNA reports that Mohammad Mehdi Gouya said on Saturday December 12 that the H1N1 virus has also been identified in neigbouring countries, showing the virus is active in the region.

High temperatures, headaches, sore throat, chest pains, cough, diarrhea, vomiting, nausea, muscle cramps and a runny nose are some of the symptoms of H1N1 strain of the flu virus.

Gouya has announced that vaccinating vulnerable groups is an effective way of trying to halt the spread of the virus.

The provinces affected by the virus so far are Kerman, Sistan-Baluchistan, Khuzestan, Alborz and Lorestan.