The Tehran police department has announced that a police shooting that wounded someone on Thursday evening at the city’s Air Force subway station was unintentional. 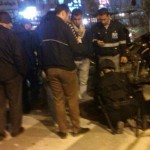 A statement from the police department indicated that a police officer accidentally triggered his weapon when he was adjusting it, injuring an individual.

The statement indicates that the officer had mistakenly thought the gun was empty.

The bullet reportedly struck the foot of a 30-year-old man, who was transferred to hospital and is said to be recovering well from his wound.