The head of an industrial dairy farm in Khorasan Razavi Province has been sentenced to over six months in jail for causing environmental pollution. 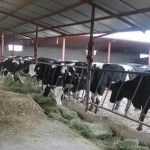 IRNA reported on Tuesday December 1 that according to the Department of the Environment, the business has ignored the department’s warning and continued to release sludge and animal waste outside its facility and on roadsides.

The Environment Department reportedly has finally filed suit against the business, and a prison sentence has been issued by a Torbat Heydarieh Court. The convicted individual has not been identified.

Earlier, the Department of the Environment announced that nine industrial units had been warned about their waste disposal methods.