The head of the Sistan-Baluchistan Board of Education reports that 100,000 school-age children are not attending school across the province, and the city of Sarbaz accounts for 30 percent of this number. 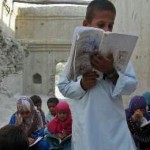 He added that: “Education is one of the chief ways of preventing addiction … There are many vulnerable children in our community that need to be identified and assisted.”

The lack of adequate schools combined with a shortage of teachers and economic hardship in Sistan-Baluchistan is the chief cause of children dropping out.

The largest number of dropouts is reportedly in middle school.

Nakhai reported that the province is implementing a new plan to draw children back into schools and he was optimistic about its outcome.