Iran’s Supreme Leader has once again raised the topic of “infiltration” and stressed the need for vigilance in government against what he has called “infiltration by the enemy”. 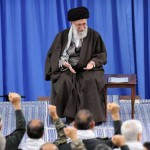 In a speech to Basij commanders, Ayatollah Khamenei said on Wednesday November 25 that “single cases” of infiltration are not as concerning as the “systematic infiltration” which he explained builds “a network among the populace”.

He added that the targets of “systematic infiltration” are the country’s “elite, influential people and decision-makers”.

In September, the Iranian leader made similar statements about the possible dangers of “economic, political and cultural infiltration by the U.S. and the West as a consequence of the nuclear agreement.

Following these statements, a number of journalists were arrested by the Revolutionary Guards and accused of having links to “infiltration plots”.

The arrests have been condemned by many progressive figures in the establishment. Iranian President Hassan Rohani responded to the arrests by saying the term “infiltration” should not be used as an excuse to settle political scores.

Ayatollah Khamenei, while supporting the president’s statement, said today that it does not diminish the dangers of “infiltration” mentioned in his previous warning.