The Qom Prefect announced that industrial pollution is affecting waters used for agricultural in the region. 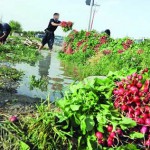 IRNA reports that Ali Khazai says industrial waste from the Qom Heat Power Plant is posing “a threat to the agricultural land in the region”.

The Ministry of Health has also confirmed that agricultural lands in nine provinces are being irrigated with polluted water.

Khazai called on the Environment Department to address the problem in Qom.

In recent weeks, a heat power plant in Tabriz was shut down by the Environment Department for polluting the environment with its waste.