Rivers redirected to save Iran’s biggest inland lake from vanishing

The secretary of the task force for replenishing Lake Urmia announced that water has begun to be transfered from the Simineh and Zarineh Rivers to the rapidly vanishing lake. 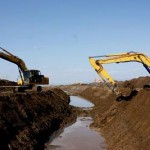 Issa Kalantari reported on Sunday November 22 that starting on Thursday November 19, 30 cubic metres of water are pouring into the lake every second because of this project.

He announced that the project entailed channeling the Simineh River to the Zarineh River and connecting the two at their convergence to the lake in order to ward off the disappearance of the Zarineh River. This feat has reportedly cost 17 billion toumans.

The task force is planning to release the Boukan Dam where the two rivers converge in order to transfer a volume of 100 million cubic metres into the lake annually.

Lake Urmia, Iran’s largest inland lake, has been rapidly drying out in recent years, and the government has acted upon several plans to keep it from disappearing.

Putin meet with Iranian leader in sidelines of GECF summit

Filmmaker among those arrested in recent sweeps