The Iranian government has begun a probe into the pollution emitted by the copper production industry and its possible link to the death of more than 40,000 livestock. 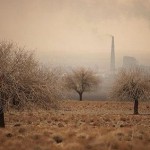 The Khorasan daily reported on November 22 that the government has ordered a probe into the effects of copper industry pollution in Khatoonabad Firels.

The report indicates that the activities of the copper production factory in the city of Babak are possibly linked to the destruction of vegetation in the region and the death of livestock.

The factory was built in 1995, and since them reportedly 40,000 livestock have died from copper poisoning.

Environmental activists state that the new factory built in the region fails to meet environmental standards to prevent further pollution. They note that the region, which used to be very green, has lost its green coverage and many people have migrated from the area.

Iran has the world’s ninth-largest copper reserves in the world and 90 percent of these resources are in Kerman.

Putin meet with Iranian leader in sidelines of GECF summit