Controversy continues over the recent arrest of a number of journalists by Iran’s Revolutionary Guards (IRGC) on charges of having links to “the enemy’s infiltration plans”, with the Jomhouri Eslami daily condemning the arrests and accusing the body that initiated the arrests of “stabbing the government in the back and the people in the throat with the term ‘infiltration’, using the money, arms and media it controls”. 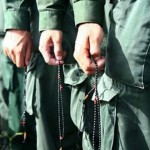 While the daily does not name the IRGC, it goes on to say that those who are accusing others of collaborating with the “enemy’s infiltration plans” are in fact the true facilitators of those plans.

After the nuclear agreement between Iran and the 5+1 was finalized in Vienna last July, talk of normalizing relations with the West and the United States was countered by Iran’s Supreme Leader, who went on to warn of “the enemy’s plans to infiltrate” the country’s economy, politics and culture.

The statements prompted hardliners to attack the Rohani government’s attempts to reestablish normal international relations as well as domestic efforts to achieve a relative level of openness in public, social and media activities.

Last week, the IRGC arrested five journalists, including Issa Saharkhiz, the former head of media relations at the Ministry of Culture and Islamic Guidance in the reformist government of Mohammad Khatami. Also arrested were Afarin Chitsaz, a columnist for the Iranian daily newspaper, and Ehsan Mazandarani, a former parliamentary correspondent and editor of the Farhikhtegan newspaper.

Meanwhile, the Secretary of the Supreme National Security Council , Ali Shamkhani, has said the matter can soon be resolved and the detainees released.