Two people were killed in a case of mistaken identity involving six police officers from Sabzevar who had traveled to Tehran to arrest murder suspects. 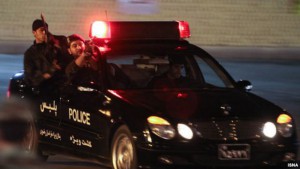 Iran daily reports that the Sabzevar police, who were traveling in two cars, had arrest warrants for the murder suspects. The police reportedly fired 15 rounds at a white Pride on Monday October 26, convinced that they had identified the suspects. Two people in the car were killed and another two were injured in the incident.

Tehran police have confirmed that the police from Sabzevar were in error, adding that investigations are ongoing.

The police are only allowed to shoot at a vehicle if they have reasonable proof that the people inside are carrying arms, ammunition or smuggled or stolen goods.
Even in those circumstances, they are required to call out for them to stop before resorting to gunfire.