The Governor of Tabas says many residents of rural areas in Southern Khorasan are migrating due to the “rapid fall in the level of underground waters” in the region. 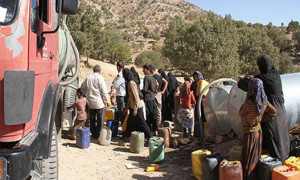 ILNA reports that at a meeting of the Council of Water Resource Protection, the Tabas Governor stressed that Southern Khorasan is among the 16 provinces currently in a severe water crisis.

The director of Tabas Water Resources announced that underground water levels in Tabas are falling by 20 percent each year.
He advised that agricultural models in Tabas need to be overhauled.

Statistics reveal that in that past 60 years, Iran’s rural population has fallen from 70 percent of the total to only 28 percent today. Many villages are now completely abandoned.

The water crisis in the most affected provinces, such as Southern Khorasan and Sistan-Baluchistan, has forced people out of rural areas and into the outskirts of larger cities.

Seven million people in rural areas now get their drinking water through tanker deliveries due to Iran’s widespread water shortage.

Activist rearrested after search and seizure at his home