Iranian Supreme Leader Ayatollah Khamenei has called on the Revolutionary Guards Corps (IRGC) to beware of efforts by the U.S. and the West to infiltrate the country’s economy, security system and culture. 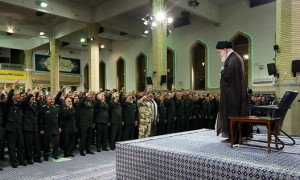 In a speech at a meeting with the commanders of the IRGC on Wednesday September 16, Ayatollah Khamenei said one of the chief responsibilities of the Corps is “the permanent monitoring of domestic, regional and international issues to identify enemy threats”, adding that “IRGC intelligence must be engaged in constantly monitoring and identifying threats”.

He said that one of the enemy tactics is “eroding beliefs” and added: “Contrary to the ideas and suggestions of foreign think tanks, which are also being reiterated by some inside the country, the Revolution is not over and its transformation into the ‘Islamic Republic’ in the sense that they think will not be possible.”

The Iranian leader stressed that the principles and ideals of the revolution are “immutable” and warned that “global arrogance is trying to turn the people’s hatred against themselves”.

“On the one hand, our enemies say that the Islamic Republic has power and influence in the region; on the other, they demand that we abandon Revolutionary spirit and thought in order to be accepted into the international community,” he said. “They want us to forget our principles in our foreign policy.”

He argued that “the enemy is invested in a gradual change in the people’s beliefs” and “in gaining influence in decision-making bodies” in the country.
“They are waiting for the people and the regime to fall asleep and, in 10 years when I am gone, achieve their goals,” Iran’s leader said.

Since the announcement of the Comprehensive Joint Plan of Action between Iran and the 5+1 in July, Ayatollah Khamenei’s utmost concern in his speeches appears to be the potential for increased western influence in the country. Meanwhile, Western countries are in the process of expanding trade and investment in Iran, with Western investors as well as several government officials visiting the country.

Ayatollah Khamenei has emphasized that the bilateral talks between Iran and the U.S. were focused on the nuclear issue and that the Islamic Republic will not enter into negotiations with the U.S. on any other topic.

Arak reactor to be redesigned by two 5+1 members