Head of Sistan-Baluchistan Regional Waterworks says the province is facing a shortage of 600 million cubic metres of water. 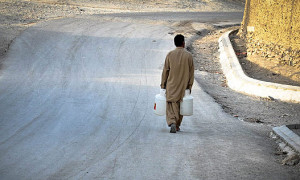 In a report on Monday September 7 IRNA reports that Sistan-Baluchistan draws two million cubic metres of underground waters annually but only 1.4 billion of that is replaced by precipitation.

Sistan-Baluchistan is one of the low precipitation regions of Iran. According to Ahmad Aqebatbekheyr head of waterworks, there are an estimated 7,305 illegals wells tapping into the province’s water resources.

Iranian government says the rate of water usage in the country is well beyond natural renewal capacity. However, the government’s concern has remained at the level of warning against unregulated water usage and no firm action has so far been taken to prevent the deepening of the water crisis across the country.