Father bringing bodies of drowned sons, wife back to Syria

The father of Syrian toddler Aylan Kurdi, who drowned with his brother and mother and several other migrants in a boat trying to reach Greece from Turkey, is returning to Kobani to lay his family to rest.

On September 3, photographs of Aylan’s body lying face down on a beach in Bodrum were given great prominence in newspapers and media around the world, hammering home the extent of the tragedy inflicted on Syrians over the past four years.

AFP reports that Abdollah Kurdi, Aylan’s father, was bringing the bodies of his three- and five-year-old toddlers and his wife to Kobani. He told reporters as the bodies were being loaded on a hearse: “I just want to sit next to the grave of my children and my wife and rest.”

On Thursday, Kurdi explained that he and his family along with nine other Syrian refugees boarded a boat to reach the Greek Islands and head for Europe. 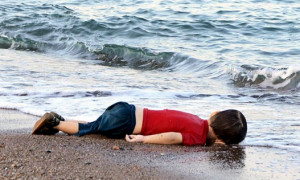 Kurdi described the events of the fateful night saying: “I was holding my wife’s hand. My children slipped away from my hands. We tried to hold on to the boat. Everyone was screaming in pitch darkness. I couldn’t make my voice heard to my wife and kids.”

“The things that happened to us here, in the country where we took refuge to escape war in our homeland, we want the whole world to see this. We want the world’s attention on us, so they can prevent the same from happening to others. Let this be the last,” Kurdi said.