Iranian intelligence and security officers prevented a gathering of families and activists from taking place at Khavaran Cemetery on August 28. 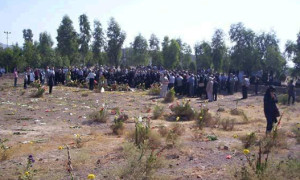 Khavaran is the burial ground of some of the thousands of political prisoners who were executed in the late eighties following an edict by the late leader of the Islamic Republic, Ayatollah Khomeini.

Zamaneh reports that the gatherers congregated outside Khavaran in order to the enter the cemetery for their annual commemoration service, but security officers refused to let them enter.

The families gather at Khavaran once in August and once in March each year to remember their loved ones. The state police usually stop the gatherings.

Today, August 28, the gatherers were told that they would not be allowed to approach Khavaran until the end of the summer.

Activists had been hopeful that the harsh treatment of Khavaran families on these commemoration days, which had become a common practice under the Mahmoud Ahmadinejad government, would be reversed by the Rohani administration.