A UN report reveals that more than 300,000 migrants have taken the hazardous route across the Mediterranean Sea to escape to Europe this year, and 2,500 of them are estimated to have lost their lives en route. 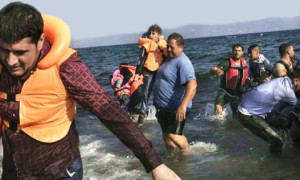 This reportedly is a significant increase over last year, when around 219,000 migrants crossed the Mediterranean to seek safety during all of 2014.

In Greece, most of the migrants are from Syria, Afghanistan and Iraq, while in Italy the asylum seekers are mostly from Africa.

The UNHCR is calling on all countries to share the responsibility of sheltering the migrants because accommodating hundreds of thousands of people seeking refuge is beyond the capacity of a single country such a Greece or Italy.